Our candidates for this date are few, and information is sparse. Today’s entry comes largely from Alfred Nevin’s Encyclopedia of the Presbyterian Church, with some additional details provided by the Biographical Catalogue of the Princeton Theological Seminary.

George Smith Boardman was born at Albany, New York on December 28, 1796. He graduated at Union College in 1816, and entered Princeton Seminary that same year, later graduating there in 1819. His time at Princeton Seminary would have been during those years when Dr. Archibald Alexander and Dr. Samuel Miller were the only professors serving at the young Seminary; Dr. Alexander being the first professor in 1812 and Dr. Miller joining him a year later in 1813. Charles Hodge did not join the faculty until 1822. 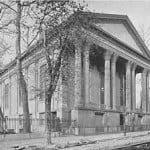 After receiving license to preach the gospel, George Boardman spent about two years preaching from place to place in Ohio and Kentucky, which was then the “Far West.” He was ordained by the Presbytery of St. Lawrence on July 26, 1821 and was installed as pastor of the Presbyterian church at Watertown, New York, where he served for sixteen years. In 1837 he accepted a call to the Bethel Presbyterian church of Rochester, New York, where he remained six years, excepting a period of six months in 1842, when he labored at Columbus, Ohio in connection with a revival, and then supplied for a while the Third (or Pine Street) Church in Philadelphia.

In 1843 he took charge of the Second Presbyterian Church at Rome, New York, which he left in 1847, to enter upon a short pastorate at Cherry Valley, New York. At the latter place he remained until 1850, when he accepted a call to the Church at Cazenovia, New York.  This pastorate extended to 1865, a period of nearly fifteen years. At the end of this time impaired health required his release. After his health was restored he eagerly engaged in preaching, either as an occasional or stated supply. For longer or shorter periods he filled the pulpits of the First Presbyterian Church of Rome, as well as the Presbyterian churches in Ogdensburg and Little Falls, all in New York. He died in Cazenovia, New York, on February 7, 1877.

In 1858, during the time that he was serving as the pastor of the Presbyterian church at Cazenovia, the honorary degree of Doctor of Divinity was conferred on Rev. Boardman by Madison University in New York (now Colgate University).

Words to Live By:
Just the facts, ma’am. Looking over what is known of Rev. Boardman’s life, we don’t have available the usual details that would add life and vibrancy to the story. Just the bare details.  Most of us seemingly just plug away at our calling in life, with little hoopla or ceremony. Occasionally we might enjoy an honor or two in life. But for the most part, we simply do our part and trust the Lord that our lives will matter, for His glory and for the good of others. And God has given us this confidence, that our lives do matter: “For we are His workmanship, created in Christ Jesus for good works, which God prepared beforehand, that we should walk in them.” (Ephesians 2:10, ESV).