An Heart Exercised Unto Godliness 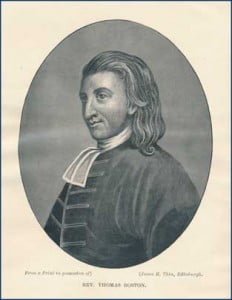 The life of Thomas Boston could be considered a walking medical study. Frequently depressed both in life and ministry, in his autobiography he wrote of his recurring miseries, his dry spells, his sense of unworthiness and dullness even in the act of preaching, or while praying in his study. At one point in his life, all his teeth fell out gradually one by one.  Try speaking or preaching with that condition! His wife even joined him in suffering from a chronic illness of body and mind. Maybe it was something in the water!

Throw in two small congregations which, when he first went to them, were unresponsive to the ministry of the Word, whether publicly or privately. The manse in one congregation was in such bad shape that his family couldn’t stay there. In the other church, for a while they lived in a stable and even had one of their infants born there.

Thomas Boston was born this day March 17, in 1676, in Duns, Scotland, with Thomas being the youngest of seven children. His parents, John and Alison Boston, were Covenanters and his father was a strong supporter of Presbyterianism, even for a time being fined and imprisoned for his proclamation of the Gospel. Thomas would keep him company in one jail.  Despite his parent’s vibrant testimony, Thomas went through religious motions only.  It was only later under the preaching of the Rev. Henry Erskine, father of two sons who became ministers, that the Spirit brought him to saving faith in Jesus Christ. Thomas would says, “it pleased the Lord to awaken me under exercise about my soul’s state.”

He attended Edinburgh University at age 15 and met his future wife Katherine (sometimes spelled with a “C”) while there. Licensed to preach by the Presbytery of Chimside, he proposed to Katherine, and she accepted. Two  years later, he received a call from the Parish of Simprim. Accepting that call and entering into the ministry of that pulpit, he was faithful in home visitation, catechizing and engaging in pastoral care twice week. During these same years five children were born into his family.

It was in one of the homes of his Simprim congregation that Boston discovered a book on the shelf entitled The Marrow of Modern Divinity by Edward Fisher. He read it and brought it to the established church. It afterwards became the basis for what is known as “the Marrow Controversy”.

In 1707, he moved with his wife and family to Ettrick, Scotland, where for the next twenty-five years, he ministered in the pulpit and homes of the congregation there. Especially did he wield the pen in writing a book still available today, often known simply as The Fourfold State [the full title is Human Nature in its Fourfold State: Of Primitive Integrity, Entire Depravity, Begun Recovery, and Consummate Happiness or Misery. Another five children were born into his family during his years at Ettrick, though in all, six of his children would die before reaching adulthood. When he himself died in 1732, he left behind his widow and four children. 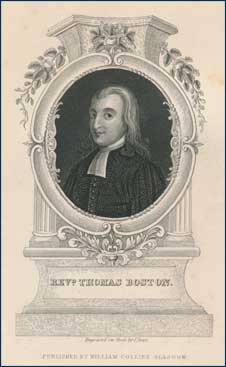 Thomas Boston is a great example to the subscribers of This Day in Presbyterian History who are pastors. Their trials are often the same ones he suffered. Like Boston, these men faithfully minister each week, lovingly being the pastor in the pulpits and among the congregations given to their care, but often with great resistance and little encouragement. Those in the pew need to remember two Scriptural commands: First, that of 1 Thessalonians 5;12, 13, which says “But we request of you brethren, that you appreciated those who diligently labor among you, and have charge over you in the Lord and give you instruction, and that you esteem very highly in love because of their work.  Live in peace with one another.” And second, “Obey your leaders and submit to them, for they keep watch over your souls as those who will give an account. Let them do this with joy and not with grief, for this would be unprofitable for you.” (Hebrews 13;17)

Boston’s Favorite Text:
“Thou, which hast shewed me great and sore troubles, shalt quicken me again, and shalt bring me up again from the depths of the earth. Thou shalt increase my greatness, and comfort me on every side.”—Psalm 71:20-21.