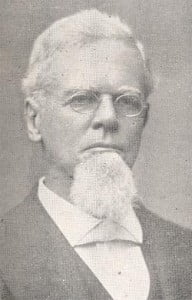 Robert Quarterman Mallard, son of Thomas and Rebecca (Burnley) Mallard, was born at Waltourville, Liberty county, on September 7, 1830. He was received into the Midway Congregational church on May 15, 1852, and graduated from the University of Georgia in 1850, before entering on his preparation for the ministry at Columbia Theological Seminary.

Then graduating from Columbia in 1855, he was licensed by Georgia Presbytery on April 14, 1855 and ordained by this same Presbytery a year later, on April 13, 1856, being installed as pastor of the Walthourville church, where he served from 1856 to 1863. Rev. Mallard next answered a call to serve as pastor of the Central Presbyterian church in Atlanta, and labored there from 1863 to 1866. He then took up the pulpit of the Prytania Street Presbyterian church in New Orleans, where he labored from 1866 until ill health forced his resignation in 1877. It was not until 1879 that he was able to return to the pastorate, answering a call to serve the Napoleon Avenue Presbyterian church, also in New Orleans, from 1879 until 1903, no long before his death on March 3, 1904.

Honors accorded Rev. Mallard during his years of ministry included having served as the Moderator of the Thirty-sixth General Assembly of the Presbyterian Church, U.S., as it met in Memphis, Tennessee, in 1896. Rev. Mallard also served as editor of the Southwestern Presbyterian from 1892 until his death in 1904. His published works were few, notably Plantation Life before Emancipation (1892) and Montevideo-Maybank (1898)

During the Civil War, Dr. Mallard was taken prisoner at Walthourville on December 14, 1865, where he was temporarily stopping, and kept with other prisoners in pens on the Ogeechee. After the fall of Savannah, he was carried into the city, and for a while imprisoned in a cotton warehouse on Bay street; was entertained for about three months at the home of Dr. Axson, as a paroled prisoner, before being finally released.