Today’s post is by our guest author, the Rev. Philip H. Pockras, who serves as the minister of the Belle Center, Ohio, RPCNA congregation, and he has served there since 1985.  He lives about three miles from Northwood, OH and is currently the Moderator of the Synod of the RPCNA.  In addition, Phil serves as the Secretary of the Board of Corporators of Geneva College.  While his wife, Judy, and his sons, Nathaniel and Isaac, are all alumni of Geneva, Phil is a 1976 alumnus of the wonderful Miami University, in Oxford, Ohio, where he graduated with a BA in History. 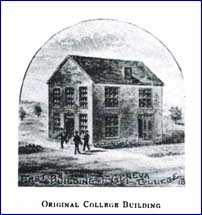 Way at the top of the Great Miami River, Covenanters came to settle in the 1820s.  They came mostly from eastern Ohio and upstate New York, unlike Covenanters farther down state.  Those who’d earlier come up from South Carolina and Tennessee founded RPCNA congregations in Cincinnati, Xenia, Cedarville, and the Beechwoods near Oxford.  The newcomers were in a clearing in the woods far to the north of these places.  That’s how the settlement came to be called Northwood, Ohio, in Logan County.

They were farther away from schools back east.  In 1836, the first minister, John Black Johnston, was involved in discussion around a stove in the store in nearby Richland.  Presiding over the discussion was his brother, J. S. Johnston, the storekeeper.  The topic was the need for a school, particularly for the RP young men in the area.  There were other places for schooling in Ohio, particularly the wonderful Miami University down in Oxford, but Old School Presbyterians and Associate Reformed Presbyterians dominated.  They were good men, and a couple of them had RP pasts, but they weren’t Covenanters now! 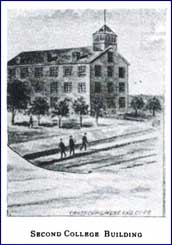 J. B. Johnston took the ball, so to speak, and ran with it. He put the idea for a “grammar school” before the Lakes Presbytery of the RPCNA in late 1847. He got their approval, and on April 20th of that year the school started up in Northwood with the name “Geneva Hall”.  Rev. Johnston had a brick building constructed, and Geneva Hall moved into the two-story, five-roomed building.  Geneva printed advertising and distributed it to papers, including those of the RP Church.  Students came, in increasing number, from nearby and from farther away.  It helped that a railroad came to the village of Belle Center, only three miles away, at around the same time Geneva Hall was opened.

The story from there on was a fairly familiar one.  There were ups and downs of enrollment and frequent changes in the faculty corps, who were mostly young ministers or young men anticipating the ministry eventually.  The RP Theological Seminary was held in the building 1849-1851.  A new girls’ school, the Geneva Female Seminary, began down the street.  Geneva Hall expanded their building to a third story and added more rooms to accommodate growth.  Several reorganizations occurred and, finally, Rev. Johnston decided he could not carry the load further.  He offered the school to the Synod of the RPCNA in 1857, and Synod accepted it, but without funding it.  Rev. Johnston left the RPC in 1858 to join the new United Presbyterian Church of North America, and Geneva Hall closed by 1861. 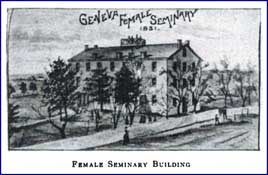 In 1865, several locals reorganized the school, hiring J. B. Johnston’s youngest brother, the Rev. Nathan Robinson Johnston, to run it.  His right-hand man, the Rev. J. L. McCartney (father of Dr. Clarence Macartney), succeeded in having freedmen come from the South for an education.  By 1872, the Hall, newly renamed “Geneva College”, was finally thriving under new President Rev. H. H. George.  It grew in size and influence there in Northwood until it moved, in 1880, to Beaver Falls, Pennsylvania, where it still is and still seeks to be “Pro Christo et Patria”, “For Christ and Country”.

The building is gone.  The area long used it as a community center but demolished it in 1941.  A memorial stone with a bronze plaque marks where it stood on Ohio 638, between Bellefontaine and Belle Center.  One can read of Geneva’s early days in W. M. Glasgow’s The Geneva Book, available digitally, or in Dr. David Carson’s Pro Christo et Patria: A History of Geneva College.

Words to Live By:
Geneva Hall/Geneva College’s longtime motto is Pro Christo et Patria, “For Christ and Country”.  J. B. Johnston and others founded Geneva to be teaching all things in the light of Christ’s Mediatorial Kingship over all things (Ephesians 1:20-23). That motto still informs Geneva’s mission, even today, as expressed through the College’s document, Foundations of Christian Education. All subjects taught, and all aspects of life, must glorify Him. As such, it forms both a high calling and a solemn responsibility before the Lord.

As the Apostle Paul has written to the Romans, “For of him, and through him, and to him, are all things: to whom be glory for ever. Amen.” (Romans 11:36). We, too, must seek to bring all things under Christ’s feet, including our dear nation. True patriotism involves working for our nation, our people, our culture to be in submission to Prince Messiah. What a goal to work for! Though our own beginnings may be small and in a little obscure clearing in a big woods, Christ knows them, honors them, and glorifies Himself through them. He shall put all things under His feet (1 Corinthians 15:25, Ephesians 1.22), so our efforts are by no means in vain.