Some Pastors Are Born Teachers.

Born in Baltimore, Maryland on March 19, 1916, John W. Sanderson later attended Wheaton College, graduating with the BA degree in 1937. He then attended Faith Theological Seminary, earning the Bachelor of Divinity degree in 1940 and the Master of Sacred Theology degree in 1945. In 1949 he earned an MA degree from the University of Pennsylvania. A final degree, the Doctor of Divinity degree, was awarded by Geneva College in 1966. 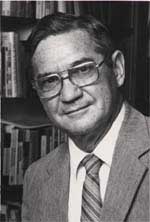 In the academic year of 1956-1957, Sanderson served as a professor at Covenant College, which was then located in St. Louis, Missouri. Leaving that position briefly, he served as a professor at Westminster Theological Seminary from 1957 to 1963. Returning to St. Louis, he taught at Covenant Seminary, 1963-1964, and then moved with the 1964 Covenant College relocation to Lookout Mountain, TN, working at the College variously as professor, dean and vice president between the years 1964–1976. Dr. Sanderson finally returned to teach at Covenant Seminary from 1976 to 1984.

He was honorably retired from the ministry in 1986, and died on April 30, 1998. He had transferred his ministerial credentials into the PCA in 1982 when the Reformed Presbyterian Church, Evangelical Synod was received into the PCA, and at the time of his death, though residing at the Quarryville (PA) Retirement Community, was a member of the PCA’s Missouri Presbytery.

We close our post today with a brief but useful article by Rev. Sanderson which was published in Salt, a student publication at Covenant Seminary.

God’s omniscience has meant much to me. Scripture teaches that the Lord knows all things about me (Psalm 139), about the world (Proverbs 15:3

In its practical outworking, this concept gives comfort because it teaches us that there can never be any surprises for God, any unforeseen obstacles, nor any changes in His working because of developments of which He knows nothing. In one of his moments of assurance Job said, “But he knoweth the way that I take; when He hath tried me, I shall come forth as gold.” (Job 23:10

). Job uttered these words against a background of his own bitter ignorance of his situation, and he found some help in this truth.

God’s omniscience also helps us during times of temptation. The assurance that nothing can be hid from Him is a deterrent to sin. Clarence E. Macartney, in his volume The Way of a Man with a Maid, tells of a scene from a drama on the life of Joseph. Potiphar’s wife is puzzled because Joseph will not succumb to her temptation. Then she spies over in the corner an idol “looking” at them. Thinking the idol’s “presence” is what is deterring Joseph, she takes the cover from the bed and covers the idol’s face. Then she turns again to Joseph, fully expecting him to do now as she wishes. In the play Joseph still refuses because his God never hides His face.

Although this is only a fictionalized account, it illustrates vividly how God’s omniscience, when we are persuaded of it in practical living, is a positive incentive to holiness. God’s full knowledge is a sobering thought for the Christian (Hebrews 4:13

God’s omniscience is one of the reasons for our believing in the full truthfulness of Scripture. We are assured of the integrity of the Word because the Word is an expression of the Spirit’s knowledge. Notice the way Paul develops this in 1 Corinthians 2. No man knows the future which God has planned for us (vs. 9), but God has revealed the future by His Spirit. The Spirit is qualified to do this revealing because He has searched all things, “yea, the deep things of God” (v. 10). Now these things have been given to the apostles by the Spirit (v. 12). The apostles preach these things and so they communicate to “spiritual” men what Paul calls “the mind of Christ” (v. 16). What a comfort in times of doubt and criticism — God knows more than the critics and this knowledge stands behind the words of Scripture!

God’s omniscience should drive us to worship. Solomon was the wisest man who ever lived, and his fame was so great that the queen traveled “from the uttermost parts of the earth to listen to the wisdom of Solomon” (Luke 11:31

). Read her reaction in 1 Kings 10 — “there was no more spirit in her.” Perhaps we should say that she was breathless! Yet Jesus says that she will condemn His generation because “a greater than Solomon is here.”