May 19: Basis of the PCA’s Book of Church Order 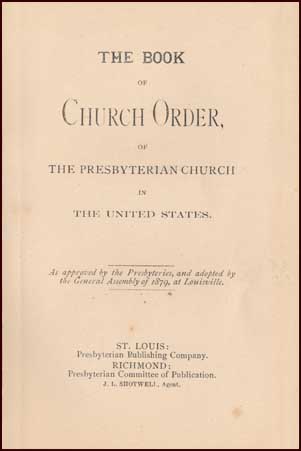 One of the most significant signs of promise for the BCO in the 1870s was that it lost its original association in PCUS opinion with centralization.. Few commented on the localist tendency of the recent revisions.

However, except for an occasional muted expression by the Christian Observer, 177 fear of centralization ceased to be a major concern in the constitutional debate. Even leaders of the independent Missouri synod, by the time they joined the PCUS in 1874, felt assured that the Church and its constitutional projects were in accord with their view that “the Presbytery under the Constitution is supreme. Significantly, none of the seven controversial issues considered separately in 1877-78 was a centralization issue.

Instead, the most articulate opponents of the BCO in the late 1870s were a few leaders, such as Plumer, who rejected the jure divino polity theories while they were gaining currency in the Church as a whole.179 By 1877 Plumer, increasingly isolated on the question, was inveighing against the BCO on the grounds that it was a disruptive change of the established system, without addressing the merits of its  provisions. His opposition to constitutional change was entangled with his personal conflict with most of his Columbia colleagues, who had been Thornwell’s close associates.181 That kind of opposition, removed from the anti-centralist onslaught of 1867, would not indefinitely forestall adoption of the new constitution. The canvass of presbyteries in 1877-78 showed that the end of the constitutionmaking process was finally at hand. Now, American Presbyterians twenty-nine of the sixty-two responding presbyteries were ready to enact the BCO.

In their votes on the seven separately-submitted issues, the presbyteries showed revisers the combination of provisions which would command maximum support.

The 1878 Assembly used the presbytery recommendations to prepare a new text, and submitted it for action.182 Welcoming the prospect of consensus, the presbyteries ratified the draft constitution by 56 votes to 8. Appropriately, church leaders then fell into a last-minute dispute about the powers of the Assembly and the presbyteries. Some argued that the Assembly still had discretion to decide on the merits of the BCO, but others considered the presbytery actions determinative in themselves. On May 19,1879, acting on the latter interpretation, the General Assembly declared the Book of Church Order in force.