The Virtual Founder of America

The German historian, Leopold von Ranke, was the one who declared that John Calvin was the virtual founder of America. 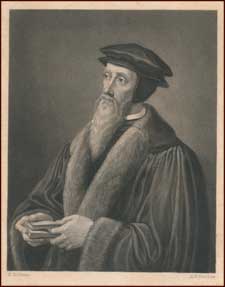 Today, July 10, marks the birth of this Swiss Reformer, John Calvin, in the year 1509.  And yes, the usual focus of this blog is on American Presbyterians.  But Calvin’s influence pervades all of our history and our culture, so it is entirely appropriate that we should look at the man and his message.

Do we have any idea of how many Calvinists there were in our country up to the time of the American Revolution in 1776?  Loraine Boettner states that out of the three million citizens of the colonies at this pivotal time in our history, 900,000 were Scots-Irish Presbyterians, 600,600 were Puritan English, 400,000 were German or Dutch Reformed, and there were a lot of French Huguenots, who were Calvinists. Two-thirds of our citizens had been trained in the school of Calvin.

Calvin was the first Reformer to demand a complete separation between the church and the state. Note carefully what I  have just said.  It wasn’t a separation between God and the state, which is the commonly held interpretation today, but between the church and state. No one denomination was going to be the favored church of the government, as it was the case back in England. There would be freedom of religion. And that unique idea could be laid at the feet of John Calvin.

Let’s enter next what has been called the Protestant work-ethic. Calvin held to the idea that every person’s calling can be characterized as a Christian calling, enabling them to serve God in every area of life. That has certainly helped our people work hard in their respective jobs, knowing that they are serving God in those jobs as well as that one who has been called to the pulpit to serve God.

Further, the Geneva Bible came to these shores by the pilgrim forefathers. This was the version whose footnotes were decidedly Calvinist.

For all these reasons, we honor John Calvin today.

Words to Live By: Today Calvinism is almost a dirty word. We need to reclaim its force in people’s lives and equally in our national life, if we desire to return to the greatness of our land. If you, reader, are largely ignorant of this Reformer and his place of influence in the early days of our people, make sure that you are not neglecting the Westminster Confession of Faith and catechism readings, which are a part of Calvin’s legacy. And delve into his Institutes of the Christian Religion, which will more than repay you in bringing Biblical theology into your faith and life.