With Noble Heart, A Man Among Men. 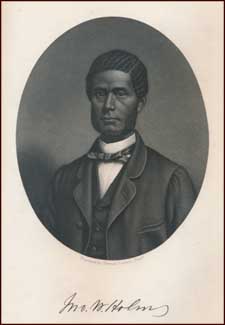 The Rev. John William Holm died on this day, September 10th, in 1863. He was the son of John W. and Margaret (Baron) Holm, and was born in the town of St. Thomas, on the Island of St. Thomas, which was at that time part of the Danish West Indies. John’s parents died while he was still only an infant. Hearing of that loss, his grandparents, who lived at Tortola, sent for him. They were quite poor in worldly wealth but they belonged to the people of God; they knew the danger of ignorance and made a way for John to attend a district school. The following portion of a letter provides us with a glimpse of Rev. Holm’s early years:

“The grand-parents soon perceived out of what kind of stuff their adopted was made, and before long the love from one to the other was great. They taught him to love and fear God, and to walk-in his ways. In process of time the two old folks died, leaving unfortunate John alone again. Mr. Alexander Baron, John’s mother’s brother, heard of their death, and sent for John to come to live with him in St: Thomas. He went back to St. Thomas, and lived there until he left for Liberia via New York. Mr. Baron took his nephew into his cigar-shop, and apprenticed him to the trade (cigar-maker): Soon Holm learned the business, and in the absence of his uncle conducted it to general satisfaction.

“His attendance at church and Sunday-school was regular, and in the latter he was soon made a teacher, which he executed to the time of leaving the Island. His habits were temperate and moral, always advising others to walk in the ways of soberness and chastity: to blasphemy he had a strong aversion.

“He went once to work at a cigar-shop, but the workmen there blasphemed dreadfully, and more so when they saw it was not to the liking of the new comer, the consequence was Holm could not remain among them.

“March 27, 1853, was his confirmation day; the Rev. J. Knox, being pastor then of Dutch Reformed Church, confirmed him.

“Prayer-meeting and other meetings for literary improvement were the places he liked to be. In 1851, he, amongst many others, established a literary society for young men, where monthly lectures were given to persons who felt a wish to hear them, and often the place was full to excess. Holm’s lectures showed that he had a thirst for learning, always full of common sense and moral worth. Unfortunately this society soon died away.

“Things worked on for years until, in 1859, quite unexpectedly to us, Mr. Holm left here for Liberia, the land he had adopted for his future home. He had long ago thought of going there, but his words were few on that subject. His uncle dissuaded him from going, but go he would, and he went, perhaps little expecting so soon to breathe his last.

“Soon after arriving in the United States, he became acquainted with the Rev. John B. Pinney, LL.D., the highly esteemed Secretary of the American Colonization Society, who became deeply interested in his welfare, and was ever his earnest and judicious friend. Learning of his long cherished purpose of becoming a gospel minister, Dr. Pinney urged him to remain and obtain an education. He however took passage for Liberia, but on his arrival, finding how great was the need of educated men, after a short stay he returned to the United States, to follow Dr. Pinney’s advice. Aided by William E. Dodge, Esq., of New York, he entered Ashmun Institute [renamed Lincoln University in 1866], in which he studied two years, thence to the Theological Seminary, Auburn, New York, entering as a member of the Junior Class, in 1861. In 1862, he was licensed by Cayuga Presbytery, and during the summer of 1863, he was laboring as a Stated Supply to the Siloam Presbyterian Church, Brooklyn, New York. Whilst thus engaged in his Master’s cause, he died of typhoid fever, September 10, 1863.

“The unexpected death of Mr. Holm caused a shadow to fall upon many a heart. He was indeed one of ‘nature’s noblemen,’ and the refining influence of divine grace had so moulded his character that he was greatly beloved by good men. Born in the rough domain of poverty, surrounded by the rugged and unsightly influences which make the lot of the poor so hard to bear, he rose above them all; and when he confronted that base prejudice, (one of the links in the villainous chain of slavery, born of the evil one) against his color, which would say to him “stand aside for I am holier than thou,” by the help of God he overcame that also, and stood “a man among men.”

“It is not enough to say, ‘He was interested in the welfare of the colored people. He was more than interested. Though never a slave himself, he felt for those in bonds as bound with them. Though never subject to the degrading influences of heathenism, which enchain the African in his native home, he had a heart both to pity and relieve. He was not ashamed of his race, but while he sorrowed in its present oppression and patient endurance of wrong, with manly pride he gloried in its historic past, and with cheerful hope and confidence labored to make for it a bright and prosperous future. Silently and constantly he was engaged by correspondence and otherwise in efforts to better their condition, and these efforts were only limited by the pressure of present duty in the Seminary.”

See the full biographical account in The Presbyterian Historical Almanac for 1864.