First Martyr of the Modernist Controversy 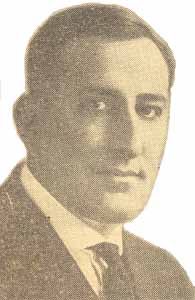 So claimed Rev. Harry Rimmer. In his book Crossed Fingers, Dr. Gary North notes that on the day J. Gresham Machen died, the funeral for Rev. Arthur Perkins was held in Wisconsin. Perkins had died just three days prior to Machen’s passing. A year prior he had been in good health.

The Rev. Leslie A. Dunn, converted under the ministry of Rev. Perkins, paid tribute to him and told the story of his ministry, his conflict, and his death:

One who has for many years taken an uncompromising stand for the truths of the Gospel has gone to his reward. The Rev. Arthur F. Perkins did not enter the ministry until he was almost thirty years of age. Following conversion, he immediately gave up his former occupation and entered Christian service, witnessing to the saving and keeping power of the Lord Jesus Christ in out-of-the-way places in Central Wisconsin, where many found Jesus Christ as personal Savior through his tireless efforts and challenging messages.

[Following a first pastorate in Milwaukee], Mr. Perkins was called by the largest Presbytery in Wisconsin to become Field Director of that Presbytery, ministering to pastorless churches and working among unordained missionaries in twenty-one counties of central and northern Wisconsin. Hundreds found in Christ their salvation through Mr. Perkins, and many struggling churches under his supervision took on new life and became independent of Presbytery for their financial support.

Because Mr. Perkins always vigorously opposed Modernism and any kind of compromise with error or worldliness, he had much opposition. Because he encouraged young people to attend Wheaton College instead of the Presbyterian College nearby, he was criticized severely by the powers that be.

Because of his faithfulness to his Lord in these stewardship matters, there were those who sought to oust Mr. Perkins from his field directorship, even though it had never thrived as it had under his leadership. When Mr. Perkins opposed the ordination of two men who denied the virgin birth of Jesus Christ, he made his enemies more determined to oust him.

That he was not a seminary trained man was one pretext given for seeking his release from the responsible position he held. Other pretexts failed until he organized the Crescent Lake Bible Fellowship, where young people were enabled to attend a strictly sound summer conference at less than half the cost advertised by the other two conferences in the state. Although there was no Presbyterian conference in his Presbytery, still they insisted he disorganize this independent camp and disown it altogether. He refused to do so and brought much opposition against himself, resulting in his trial for insubordination. Presbytery’s judicial commission suspended him from the ministry for two years. Although he appealed the case to Synod and to General Assembly, he observed his suspension, and for months refrained from preaching and exercising the prerogatives of a minister. It was a long, hard strain, with added financial burdens because of the ecclesiastical trials. Dr. Harry Rimmer was his counsel and labored much for him. His people in the Merrill, Wisconsin congregation stood by him courageously with their sympathy, prayers and financial help.

The Lord has wonderfully used this man of God who refused to compromise with worldliness or error, or to soften his message to please men, and refused to listen to the counsels of men in order to win their votes in the councils of the Church, when it meant a denial of his Lord. May God’s sustaining grace be with his widow and three children surviving him!

The Rev. John J. DeWaard, of Cedar Grove, Wisconsin, brought the sermon at the funeral of Rev. Perkins. His concluding words drove home the abiding heart concern of Perkins’s ministry:

To be saved is so great a thing that no man can earn it whatever he might do, and certainly no sinner could earn it. For the sinner by nature cannot do anything well pleasing unto God. I need only remind you that the word “save” means healing. It is a healing of body and soul alike. To be saved is to be delivered from this world of sin; to be saved is to be translated into our Father’s House with its many mansions. Salvation is the redemption of soul and body from the guilt and power of sin. The saved soul rejoices in the blessed assurance that all sin is forgiven for the Saviour’s sake, and the saved body, “being still united to Christ does rest in the grave until the resurrection.” Comprehensively, but simply, the Bible defines salvation in the terms, “I will be your God, and ye shall be my people.” God is not a God of the dead but of the living. Such is the promise of the Bible, and God’s Word cannot be broken. Such is the promise of our Lord who died on the cross that this promise might become a reality to those who trust only in His name.
Mr. Perkins would want me to ask you a serious question: Are you saved? Will you by the strength of the Lord endure to the end, and keep the faith?

Through the generous donation of Rev. Robert Smallman, former pastor of the Bible Presbyterian Church, Merrill, Wisconsin, where Rev. Perkins was the organizing pastor, the PCA Historical Center holds what constitutes the papers of the Rev. Arthur Perkins. The collection is small, consisting of 27 folders, with about half the materials concerning the ecclesiastical trial brought against Perkins by the Winnebago Presbytery.