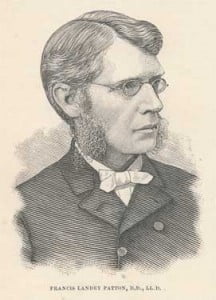 Frances Landey Patton [22 February 1843 – 25 November 1932] was certainly coming up in the world! This native of the Bermuda Island had pastored three churches, beginning in 1865, prior to his being installed in 1873 as professor of didactic and polemic theology at the Presbyterian Seminary of the Northwest [later renamed McCormick Theological Seminary]. Then in 1881, installed as professor of systematic theology at the Princeton Theological Seminary. Then, in 1888, he was installed as president of The College of New Jersey, and it was during his tenure that the school was renamed Princeton University, in 1896. He served as president of the school until 1902, when he was succeeded by Woodrow Wilson. Patton then became president of the Princeton Theological Seminary, and served in that capacity from 1902 until his retirement in 1913.

Patton was a thorough proponent of the historic Princeton position, which admitted no novelty in the sacred theology. He opposed modernism and the higher criticism. When in 1906 J. Gresham Machen began as an instructor at the Seminary, Dr. Patton proved to be a great influence on Machen. Later, in 1926, when Machen was nominated to take the chair of apologetics and ethics, Patton wrote in support of Machen’s bid for that position.

The following brief quote comes from Dr. Patton’s address on the occasion of his inauguration, on this day, October 27, 1881, as professor of systematic theology at the Princeton Theological Seminary. With these closing words, Patton presents a clear and summary analysis of the choice confronting the world in the modern era:— 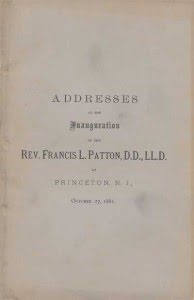 The question of the hour is not whether God is the logical correlative of our consciousness of moral obligation; nor whether happiness or holiness is the end of life; nor whether conscience is intuitive or developed out of a “strong sense of avoidance.” It is not expressed in the utilitarianism of Mill, or the altruism of Spencer. It does not reveal itself in the paradoxes of Sidgwick, or the transcendentalism of Bradley.

It is the question whether there can be any guarantee for the purity of home, or the stability of the social organism under a philosophy that makes man an automaton. And if, as Mr. Frederick Harrison says, the present age is “ the great assize of all religion,” it looks as if the time had come for the trial of the issue. We have had enough of demurrers and continuances, enough of answers and replications, enough of rejoinders and surrejoinders. The time has come when men must face the question of the possibility of morals. They must decide between a metaphysic that leads to an absolute vacuum in knowledge, absolute irresponsibility in morals, absolute mechanism in life, and a metaphysic that will secure the separateness, the sovereignty, the morality, the immortality of the soul.

With the soul assured, the way to God is plain. And if God is a revelation of God may be. With the possibility of a revelation conceded, the proofs are sufficient, And with a proved revelation before us it is easy to understand that in God we live and move and have our being; that the truth of history has been,the unfolding of His purpose; that the order of nature is the movement of His mind; that the work of the philosopher is to rethink his thought; that Christianity is the solution of all problems ; that the blood of Christ removes the blot of sin; that the Church is the flower of humanity; that the incarnation of the Logos is God’s great achievement; that Jesus is the brightness of His Father’s glory, and the express image of His person; that in Him are hid all the treasures of wisdom and knowledge, and that by Him all things consist.

Words to Live By:
“If God is, then a revelation of God may be.” [The quote above lacks the comma, which I think helps make better sense of the sentence.] If there is a sovereign, personal God, then He may reveal Himself in such a way that we can understand something of who He is and what He demands of us as His creatures. The choice confronting modern man is simple. Either believe in an impersonal universe in which there can be no purpose, a universe in which everything is irrational, OR know that there is a God who is, a God who has purposed, at His own expense, to remove that which divides us from fellowship with Him, a God who has said to all who call upon Him in faith, “I will be your God and you will be My people.”