“The Right Way to Hold Your Noses”

Dr. T. Norton Sterrett was born in Persia of missionary parents, November 10, 1912. After the age of two, he grew up in the United States. He received the B.A. from Columbia Bible College and from Wheaton College, and the Th.D. from Dallas Theological Seminary. 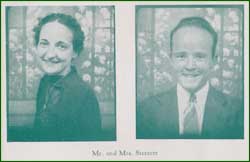 He was married in 1938 to Eloise Fain and two children were born to this marriage, Eloise Anne and Gerald Fain. He and his family went to India as mis­sionaries under the Independent Board for Presbyterian Foreign Mis­sions in 1939. In the initial work in India, he engaged in general village and city evangelism and Bible teaching.

“Dr. Sterrett had a commitment to India as a servant of the Indian people in true humility. He never tried to impose foreign structures or cultural values on the Indian Church or Indian people. … He had a con­sistent and steady burden for Bible teaching which would generate Bible students who could teach others. . . . Their interest was further than the students of India. The Indian church at large and other evangelical bodies were within their concern. . . . Let me thank IFES for sending such a faithful ambassador of the Gospel. . .

After 36 years of service in India, the Sterretts returned to the United States (1975) and he worked on the staff of InterVarsity Christian Fellowship at Nyack, N.Y., from July, 1975, until his death. A host of Indian Christians, as well as members of the body of Christ around the world, thank God for the faithfulness of His servant, T. Norton Sterrett.

The following is a portion of a letter sent back from the mission field by Rev. Sterrett:—

“We come to tell you the right way to hold your noses.” This may seem queer sort of language to use in preaching the Gospel, and yet those are nearly the exact words used by our language teacher, Mr. Das, not long ago, when speaking to a group of Indian villagers. Why? Well when we had talked to them of the way of salvation through Christ one of them spoke up to say that what we said might be true but it didn’t make much difference; one could hold his nose by reaching from the front with one hand or else by reaching around his head with the other; it is the same nose. That is to say, perhaps one can have salvation through Christ, but we can also reach God through Hinduism, through Islam, or anything else. This is an all too prevalent idea, for Hinduism seems able to absorb nearly anything else and still call it Hinduism. But oh, the solemnity of the words, “There is none other name under heaven given among men, whereby we must be saved.”

Words to Live By:
Indeed, there is no other name under heaven, given among men, whereby we must be saved (Acts 4:12). Salvation belongs to the Lord. It is His alone to bestow, and He has declared that His only provision is through the shed blood of His Son, Jesus our Messiah. We believe this, but are we living accordingly? Are we living out our remaining days in such a way that we declare, both in word and deed, the truth of these words?