Our post today comes from guest author and good friend, Barry Waugh, who has recently begun his own blog, PRESBYTERIANS OF THE PAST. Where THIS DAY IN PRESBYTERIAN HISTORY has always been intended as a brief devotional based on Presbyterian history, Barry will in contrast be posting just a few times a month but with fuller treatment of the subjects he takes up. The following is one of his most recent posts, this on the New School Presbyterians and the availability of some rather rare Minutes of their Synod of Philadelphia:— 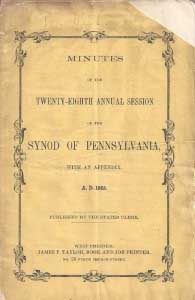 During the course of your web-surfing or reading about Presbyterian history you may have run across the terms, “Old School” and “New School,” or their abbreviations, “OS” and “NS.” Before getting to the purpose of this post, which is the PDF download of the minutes of the Synod of Pennsylvania, New School, a brief explanation of the terms “New School” and “Old School” may be beneficial.

Old School—Generally speaking, the Old School believed—in a stricter or fuller subscription to the Westminster Confession of Faith and its associated standards; that the issue of slavery was a political and not a church issue; that missionary work should be under the direct oversight of the Presbyterian Church and not through independent mission organizations; and that the Plan of Union of 1801 affiliating the Presbyterian Church in the United States of America (PCUSA) and the Congregational Church had been detrimental to the Presbyterians because of some of the theological views and practices from New England. These are not all the points of disagreement but they cover most of the issues. It could be said that the Old School believed—the church should be directly ruled in all its ministries by elders connectionally associated through its sessions, presbyteries, synods, and general assembly, with its interpretation of the Word of God governed by a conservative use of the Westminster Standards, and it believed that the church’s ministry is exclusively spiritual and not political. Thus, the Old School had a strong sense of the Word’s warrant for presbyterian government as the church government and it held to the necessity of confessional standards for proper interpretation of the Bible and governing the church rightly in its spiritual ministry.

New School—Generally speaking, the New School believed that—a considerably lesser adherence to the Westminster Confession of Faith and its associated standards was acceptable, even necessary; the issue of slavery was within the bounds of the spiritual ministry of the church and many believed that immediate abolition was the best solution; the use of what might be called today interdenominational mission organizations was beneficial and more efficient for missionary work and church extension than committees overseen directly by the presbyters; the Plan of Union had not only benefitted the Congregationalists and the Presbyterians, particularly in terms of the growth of both denominations in the western frontier (i.e. New York, Ohio, etc.), but the New England theology influenced the PCUSA to be less rigorous and more open to differing doctrinal ideas.  The New School views could be summarized—the Presbyterian Church is governed by elders locally and connectionally but other polities, including congregational, are scriptural as well; the Presbyterians should participate in missionary organizations that are not under direct control of the denomination for more efficient evangelism; the interpretation of the Word of God by the Westminster Confession is of lesser or no importance for church doctrine and practice; and the church’s ministry is spiritual, but the spiritual work does not exclude political activism for what the church sees as pervasive sins in society.  Thus, the New School had a lesser sense of the uniqueness of presbyterian church government and a more inclusive idea of denominational ministry; a liberal, or nonexistent, adherence to the confessional standards for doctrine; and an expanded idea of what the spiritual ministry of the church looks like.

If you have never read anything about the Old School and the New School you are probably thinking that the two could not continue to exist together because it was a disaster from day one. You would be correct. The point for the beginning of trouble was seen by the Old School to be 1801 when the Plan of Union was accomplished. There were those who opposed the Plan of Union, but their appeals were not heeded. As the years passed, the members of the respective schools found their points of difference more polarizing, especially as the issue of slavery sectionalized both the nation and the churches. At the 1837 General Assembly of the PCUSA, the Old School had the majority and was able to undo some of the affects of the Plan of Union, the plan itself, and eject the New School. Obviously, it was not a happy situation following the 1837 General Assembly. The press, both private and religious, reported some of the unseemly moments on the floor of the assembly as commissioners railed and argued. Following the division, both sides claimed to be the true PCUSA.

When the Synod of Pennsylvania, New School, convened in the evening of Tuesday, October 17, 1865, in the Third Presbyterian Church, Philadelphia, the retiring moderator, B. B. Hotchkin, the pastor of the Marple Church, passed the gavel to Rev. Thomas J. Shepherd of First Church in the Northern Liberties, Philadelphia. The meeting was particularly significant because it was the first annual meeting following the Civil War, the assassination of President Lincoln, and the inauguration of Vice President Andrew Johnson to the presidency. Since the previous synod meeting there were many things that had changed. For the New School, one of, if not the key issue for its identity, abolition of slavery, had been achieved. There was some optimism in the land about the future, especially if one lived north of the Mason-Dixon Line, but the optimism was tenuously mixed with different ideas about how the post-war situation with the Southern states should be handled. In the North, many adamantly contended that the former Confederacy should pay a heavy price, but on the other end were others desiring to see all the states working together as a reunified nation. In the South, there were many fearing retribution, wondering if they would have food, and apprehensive of finding work in the devastated economy, however, there were also numerous others consumed with anger against the North. Between the two poles of ideas in both North and South were a myriad of other perspectives.

The tension in the nation carried over into the meeting of the synod. The presbyters tended towards the heavy-price-to-be-paid view regarding the South’s future. The synod was meeting just a few months after the North and South had ceased killing each other and there was much mourning, ire, and bitterness. A series of six resolutions regarding “the State of the Country” were passed unanimously with a seventh added later, which was also passed unanimously. On the final day of the sessions as the business was coming to an end, a resolution was adopted regarding the health of Rev. Albert Barnes, who was a key figure of the New School and had been tried for heresy with the impetus provided by the Old School. Other resolutions regarding the usual house cleaning at the end of a synod were accomplished including the resolution of thanks to the host church. The synod adjourned to meet in the First Church, Carlisle, October 16, 1866, per the minute taking of Stated Clerk William E. Moore.

Please, download the free PDF of these minutes at the link below. The digital minutes were scanned from a copy owned by the author of this site. The minutes have an appendix that includes the synod’s standing rules; a directory of the presbyteries, churches, ministers, and elders; and there is a list of synod and presbytery officers.