Not the Optimus Prime, but Maybe Close. 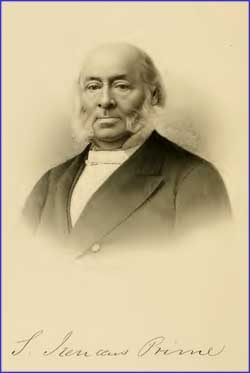 Born in Ballston, New York on this day, November 4, 1812. He obtained his college education at Williams College, graduating there in 1829. After a brief delay, he entered the Princeton Theological Seminary as part of the Class of 1833 and was later ordained by the Presbytery of Albany, June 4, 1835, being installed as the pastor of the Presbyterian church in his home town of Ballston. Rev. Prime remained in this pulpit, 1835-36, and then answered a call to serve the Presbyterian church in the town of Matteawan, New York, about one hundred twenty miles south of Ballston.

Prime remained at Matteawan from 1837-1840, when the opportunity arose to serve as the assistant editor of The New York Observer. This paper was one of many Christian newspapers published in that era, and here Rev. Prime truly began his life’s work. In this capacity he labored from 1840-1848, stepping away from the post only for a few years, 1848-1849, to serve as Secretary of the American Bible Society. Thereafter, Prime took on the role of lead editor of The New York Observer, and remained at this post from 1850 until his death in 1885. By that time the paper had become something of a family business, with his brother and his son running the paper after his death.

Rev. Prime proved to be a prolific author and a valuable contributor to the wider culture. He founded the New York Association for the Advancement of Science and Art, served as president and trustee of Wells College and also as a trustee of his alma mater, Williams College. Honors conferred upon him during his lifetime included the Doctor of Divinity degree from Hampden-Sydney College (1854). Rev. Prime passed away on July 18, 1885, while residing in Manchester, Vermont. Time does not today permit me to list his many publications, some of which can be found on the Web, here.

Words to Live By:
Sometimes we start out in life headed off in one direction, only to find that the Lord brings our way, entirely unexpected, a change for the better. It was a common expression among the Puritans that the Lord never removes one blessing, but what He gives a greater. The God whom we serve purposes only to bless His children. There are times when that blessing may not seem like a blessing, but God always has in view what is best for us, and we can find rest in knowing that He is good and that He loves us, not for who we are, but for who we are in Christ our Savior.