How did it get so bad?

When I was a pastor, the question of our title was once asked of me by a couple of Christians who simply did not know how their local PCUSA church, which had been started by their Scottish and Irish ancestors, could have sunk so low in its adherence to the Bible. It was the beginning of a spiritual journey by them into the Presbyterian Church in America. 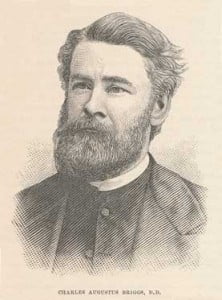 Certainly there were many instances of spiritual departure all through the early years of Presbyterianism in America, many of which have been discussed on this blog since we began in 2012. But the real and damaging departure into apostasy, which continues today, came with the introduction into theological liberalism by Charles Augustus Briggs. He was the first major advocate of Higher Criticism into the American Presbyterian scene.

As American theological students finished their training here and then went to Europe for advanced training, they were introduced there to liberal ideas regarding Holy Scripture. The question was simply stated: “Were the Scriptures of the Old and New Testaments inspired of God, the only infallible rule of faith and life, without error in the original languages?” Higher Criticism concluded that the Bible was not inspired, inerrant, and infallible. And so Charles Briggs studied under their Bible-denying ideas in Germany, 1866-69, and returned to America, eventually taking a post teaching Hebrew at Union Theological Seminary in New York, 1874-91, and then becoming the school’s new Professor of Biblical Theology. He was inaugurated as Professor on this day, January 20, in 1891. In his opening address to the seminary, he boldly set forth his denial of the inspiration of the Old and New Testaments.

While this seminary of the Presbyterian Church was friendly to this new view, the denomination was not. Led by the conservative theologians of Princeton Theological Seminary, like A.A. Hodge, the General Assembly refused to accept that appointment. Twice he would be tried by the New York Presbytery of the denomination for heresy, and twice the regional body would declare him not guilty of errors. Soon the denomination entered by appeal into the issue, and two years later, deposed him, assessing him as a heretic with his denial of Scriptures. He joined the Episcopal church, and continued on at Union Seminary.

Union Seminary kept the polarizing figure by withdrawing from the Presbyterian denomination. However, the latter continued to receive into its ranks graduates of Union Theological Seminary. By 1924, the Auburn Affirmation was published, as has been described in other posts on this blog. The modern apostasy had begun in the church with this denial of Scripture. Once Scripture is denied, then other biblical truths fall by the wayside in both doctrine and practice.

The first ordination vow of the Presbyterian Church in America reads, “Do you believe the Scriptures of the Old and New Testaments, as originally given, to be the inerrant Word of God, the only infallible rule of faith and practice? Every teaching and ruling elder, to say nothing of deacons in the church, must adhere to this vow. Our presbyteries and the General Assembly must seek to keep the church pure in doctrine. If we do not, then present and future members might be asking how our church has became so theological liberal in faith and life. Let us learn from the past and remain true to the inspired, inerrant, and infallible Word of God, the Bible.