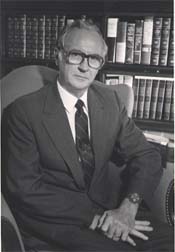 George Aiken Taylor was born on January 22, 1920 in Recife, Pernambuco, Brazil, the son of Presbyterian missionaries George W. Taylor and Julia Pratt Taylor.  When he was fifteen years old he returned to this country to complete his education, graduating from the Presbyterian College of South Carolina with the A.B. degree in 1940.  He taught in the South Carolina public schools for a year, and then entered the U.S. Army in 1941.  He served with the 36th (Texas) Infantry Division and rose to the rank of Captain, commanding a heavy weapons company in the 142nd Infantry.  He participated in five major campaigns in World War II, was wounded once and decorated once.

Taylor married the former Blanche Williams of Chattanooga, Tennessee in 1942 and to this marriage, four children were born.

Dr. Taylor served as pastor of First Presbyterian Church in Alexandria, Louisiana from 1954 to 1959.  He became interested in the work of Alcoholics Anonymous through his own work with alcoholics, developing an appreciation for A.A.’s principles, and wrote A Sober Faith in 1953.  His book St. Luke’s Life of Jesus was published in 1954.

In 1959 Dr. Taylor became editor of The Presbyterian Journal, an independent weekly with an international circulation and with offices in Asheville, North Carolina.  He served in this capacity for twenty-four years, and during that time was active in the conservative movement in the PCUS which eventuated in the Presbyterian Church in America (PCA), formed in 1973.  He was a leader in the PCA and was elected moderator of its General Assembly in 1978.

In 1983, Dr. Taylor was named president of Biblical Theological Seminary in Hatfield, Pennsylvania, and was inaugurated in December of that year.  However, three months later—on March 6, 1984—he died suddenly.  Memorial services were held in Pennsylvania, and funeral services at Gaither Chapel in Montreat, North Carolina.  Dr. Taylor was buried in nearby Swannanoa, North Carolina.