11 February, 2016 in Uncategorized by archivist | No comments

Some have heard of the small American denomination known as the Reformed Presbyterian Church and how they took a early stand against the practice of slavery. But few have read any of the story of what was involved, what it cost to take that stand, and the blessings that followed from their Scriptural obedience. It would make an interesting study, to ask how it was that this Church saw such near-unanimous obedience in standing true to the Scriptures and against the prevailing culture. I would argue that what we read here is the proper exercise of that doctrine known as the Spirituality of the Church, in which the Church exercises its God-given authority and effectively disciplines sin where it finds it.

Our post today comes from the September 1875 issue of Our Banner, a publication of the Reformed Presbyterian Church of North America. 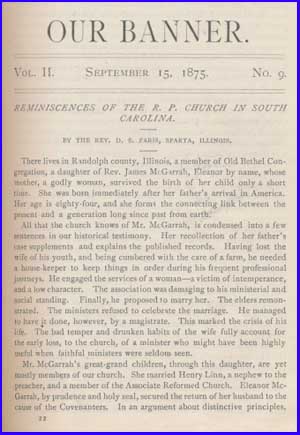 Extracts of Minutes of the Committee of the Reformed Presbytery, on the Subject of Slavery.—Minutes of February 11, 1801.

“A petition came in requesting a reconsideration of the business respecting slaveholders, so far as this species of traffic might be supposed to affect Christian communion—and that such steps might be taken in the premises, as should place that whole affair on such a moral basis as the principles of our common profession, seem imperiously to demand.”  “It was agreed prior to the further consideration of this subject that all slave-holders in the communion of this church, should be warned to attend the next meeting of the Committee, and that there the merits of the petition aforementioned, shall be particularly attended to.”

Minutes of February 18, 1801.—“The consideration of the state of the enslaved Africans was introduced this day into the Committee.  The purport of the discussion was to ascertain whether those who concurred, more or less, in the enslavement of these miserable subjects, should be considered as entitled to communion in this church.  It was unanimously agreed that enslaving these, our African brethren, is an evil of enormous magnitude, and that none who continue in such a gross departure, from humanity and the dictates of our benevolent religion, can have any just title to communion in this church.”

To carry this resolution into effect, the following note was sent to every member of the congregation, not then present, involved in the evil, viz:  “Sir, you are hereby informed, that none can have communion in this church who hold slaves. You must therefore immediately have it registered, that your slaves are freed, before the sacrament. If any difficulty arises to you in the manner of doing it, then you are desired to apply to the Committee of Presbytery, who will give directions in any circumstances of a doubtful nature in which you may be involved, in carrying this injunction into execution.”

At this time the Rev. Wm. Martin was deposed from the office of the ministry, having been found guilty of several heinous sins and scandals, among which the third in order belongs to the present subject, and illustrates the faithful application of discipline to remove slavery from the church.

“3d, That he sold some time since, a negro man then in his possession, thereby doing everything in his power, to prevent himself from ever having it in his power to liberate a poor wretched fellow mortal in any other period in his life, putting this price of blood among his substance, while he left his fellow-mortal to languish out the last moment of his life, under the galling chains of slavery without one scanty ray of hope of ever obtaining deliverance any other way but by the hand of death, and all this after the determination of the court and church to which he belonged had marked African enslavement with the strongest degree of abhorrence.” The last words quoted undoubtedly point to Presbyterial action on the subject of slavery or at least to the action of a committee of Presbytery prior to the deed of selling the slave. This action was thereafter taken by the Scotch Presbytery itself or by its committee, as that was the court to which Mr. Martin belonged until he gave in his submission in 1801 to the committee of Reformed Presbyterians in the United States of America. Mr. Martin’s want of proper feeling in reference to his sin, appears from the plea he made for himself. “Ye a’ see I’m opposed to slavery for I ha’e sold mine.”

As the communion season was near at hand, and they were not familiar with the legal formalities in the deed of emancipation it was found necessary to settle the matter in preparation for the sacrament by binding the parties under heavy penalties to carry out the liberation of their slaves “as soon as it could possibly be ascertained” how it could be legally done. ” It was accordingly agreed that said bonds be in the meantime delivered into the hands of Rev. Thomas Donnelly, who is held responsible for the same; and that the said Rev. Thomas Donnelly, John M. Ninch, and Robert Hemphill be appointed a committee to inquire into the peculiar circumstances of each of the slaves to be liberated, as also into the true legal forms of emancipation; that the intentions of the Reformed Presbytery in purging out the accursed thing from among them, may be carried into the most speedy effect.” This last language implies that the American Presbytery had also given orders on this matter. Indeed, it is well understood that the committee of Presbytery came to the South specially empowered by Presbytery to abolish slavery in the church. It was further ordered that Mr. Donnelly should make an early report to Presbytery in reference to this matter. It will thus be seen, that Covenanters always viewed with the utmost abhorrence the crime of slavery; and while they provided for the natural freedom of the enslaved, they enquired about their circumstances, it is presumable, in a spiritual as well as a temporal point of view. The records do not show that Mr. Donnelly ever reported the matter to Presbytery and therefore to bring it to a close, we must depend on tradition. It is said that of all those that gave bonds, only four persons failed to carry out their obligations.  One of these, James Kell, was afterwards taken in the act of adultery with his own slave—a second died a vile drunkard—and a third was reduced to abject poverty, and was caught stealing the nails to make his wife’s coffin. Thus the brand of Cain was put on the sin of slavery and that in connection with the discipline of our church. The blessing of God followed those that turned from their sin, and some of their children and grand children became ministers and elders in the church.

Some of the slaves then freed also became members of the church.  Three children of Will and his wife, the former set free by James Hunter, and the latter by John McDill, are now members of Church Hill congregation in Illinois.

The ministers of the church all habitually denounced the judgments of God on the nation for the sin of slavery. If there was any difference in the degree of abhorrence felt against the inhuman and revolting traffic, it was on the part of the ministers and people of the South. They had seen the monster sin, not to pity and embrace; but to hate and abhor. The underground railroad found its most daring conductors and station agents among Carolina Covenanters. Having abolished slavery among themselves, they were not ashamed to be called abolitionists ; and they were not afraid to incur the wrath of citizens and civil officers by helping the fugitives. It was part of their religion.

Mr. Donnelly retained his fervid hatred of the system to the end.  His hearers say, that as he had always consistently opposed the iniquitous institution, his severe denunciations and arguments were overlooked, with some such remark as, ” Oh, it is only old Donnelly, let it go ;” while if a Northern man had said the same thing it would have secured him a coat of tar and feathers. Nor was he at all a respecter of persons in reproving this sin. After his son became a Presbyterian and a slaveholder, they must needs discuss the irrepressible subject. The son claimed that there were Christian slaveholders. The father replied, ” It may be so, but a slaveholder among Christians is like a black swan in the flock.”  Slavery was certainly the principal cause of the exodus of Covenanters from the South.  Rev. James Faris used to say that he would have made the South his home, had it not been for the danger to his family through the temptations held out by the peculiar institution.