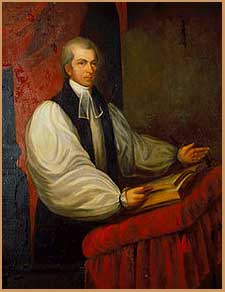 Originally a lawyer (and cousin of an early President), the clergyman James Madison (1749-1812) had high academic potential (even teaching philosophy and math at the College of William and Mary) and was ordained to the Anglican ministry in 1775. Shortly thereafter he was appointed to the presidency of William and Mary, where he served until 1812. He was consecrated at Canterbury in 1790 to become the first American born bishop of Virginia.

Madison, though an Anglican, was a firm supporter of the Revolution, even venturing on occasion to speak of the kingdom of heaven as a “republic,” a political sentiment that raised eyebrows among loyalists and applause to be sure among colonists. He fought with the revolutionaries against Britain in the war. A polymath (a surveyor, cartographer, science teacher, and economics professor, using Adam Smith’s The Wealth of Nations as a text!), Madison was a faithful preacher as well.

His 1795 sermon was delivered on a designated Fast Day, declared by President George Washington to be observed on February 19th. His chosen text (from 1 Sam. 12) was “Only fear the Lord and serve him; for consider how great things he hath done for you.”

He noted from the outset that these American events were signal events, with unusual consequences; he also thought the tokens of divine providence were clear and self-evident. He would leave it to “the sons of irreligion, wrapped in their dark and gloomy system of fatality [to] refuse to open their eyes to the great luminous proofs of providential government, which America displays; let them turn from a light, which their weak vision cannot bear.”

In the tradition of Cotton Mather (see his Great Works of Christ in America), Madison sought to rivet the thoughts of his listeners to “those great things, which the Lord hath done for us, to those manifold displays of divine providence, which the history of America exhibits; and let the subject afford an opportunity to revive within us sentiments of lively gratitude, and excite sincere resolutions to fear the Lord, and to serve him; in a word, to increase daily in piety, and in all those noble affections of the soul which dignify the christian and the patriot.”

His sermon asserted the following points:

Under this third head, hear a sample of his piety and rhetoric:

Yes, brethren, if the effects, which we have, in your hearing, thus slightly traced; if the period of time when America was discovered, the necessity and the consequent production of other means for the restoration of human rights, than those, which had hitherto operated; if her origin, and the consequent possession of a principle, which, nurtured and matured, is now pervading, and will animate and excite the whole family of mankind to vindicate their lost rights; if her astonishing progress from infancy to the station, which she now possesses, a progress, which the opposition of a ten-fold force served only to accelerate: if, become free and independent, having accomplished the most unparalleled revolution, a revolution unstained by fratricide, or the blood of the innocent, she hath given to nations the first lesson by which their rights may be preserved . . . ; if she hath established upon a rock, the empire of laws, and not of men; if America, as a tender and affectionate daughter, is ready, from her exuberant breasts, to afford the milk of regeneration to her aged and oppressed relatives; if, in short, from a beginning the most inauspicious, she hath thus outstript all political calculation, thus risen to this day of glory, thus ascended on high, thus triumphed over every obstacle, and if all these be effects worthy of the divine interposition, then we will still cherish the fond idea, we will cling to the full persuasion, that our God hath been, ‘our strength, our refuge, and our fortress,’ a God, who, at the birth of creation, destined man for liberty, for virtue and for happiness, not for oppression, vice and misery.

He called for praise and renewed service to the Lord, warning against forsaking God, who he described equally as “the remunerator of virtue” and “the avenger of iniquity.” He preached that as soon as “that divine system of equality, fraternity, and universal benevolence” is abandoned, “the moment that religion, the pure and undefiled religion, which Heaven, in compassion to the infirmity of human reason, vouchsafed to mortals, loses its influence over their hearts, from that fatal moment, farewell to public and private happiness, farewell, a long farewell to virtue, to patriotism, to liberty!” Madison believed that “Virtue, such as republics and Heaven require, must have its foundation in the heart.” Moreover it had to be internalized, and had to derive its constancy “not from the changeable ideas of the political moralist, or the caprice of the wisest of human legislators, but from the unchangeable father of the universe, the God of love, whose laws, and whose will we are incited to obey by motives, the most powerful that can actuate the human soul.”

Hardly a secularist, Madison averred: “Thus taught by religion, man becomes acquainted with his real character; instead of being amenable only to human laws, whose utmost vigilance he may and often does elude, he sees himself accountable to a being, as just as merciful, as omnipotent as omniscient. He finds himself destined, not to the narrow range of the beasts that perish, but to immortal life. The bright prospect invigorates his soul.”

His conclusion should be considered:

Certainly, my brethren, it is a fundamental maxim, that virtue is the soul of a republic. But, zealous for the prosperity of my country, I will repeat . . . that without religion . . . the religion which our Saviour himself delivered, not that of fanatics or inquisitors, chimaeras and shadows are substantial things compared with that virtue, which those who reject the authority of religion would recommend to our practice.—Ye then who love your country, if you expect or wish, that real virtue and social happiness should be preserved among us, or, that genuine patriotism and a dignified obedience to law, instead of that spirit of disorganizing anarchy, and those false and hollow pretences to patriotism, which are so pregnant with contentions, insurrections and misery, should be the distinguishing characteristics of Americans; or, that, the same Almighty arm which hath hitherto protected your [country] and conducted her to this day of glory, should still continue to shield and defend her,—remember, that your first and last duty is ‘to fear the Lord and to serve him;’ remember, that in the same proportion as irreligion advances, virtue retires;—remember, that in her stead, will succeed factions, ever ready to prostitute public good to the most nefarious private ends, whilst unbounded licentiousness, and a total disregard to the sacred names of liberty and of patriotism will here once more, realize that fatal catastrophe, which so many free states have already experienced. Remember, the law of the Almighty is, they shall expire, with their expiring virtue.

Centuries later, columnist William Safire suggested that Ronald Reagan’s “It’s Morning in America” speech could have been taken from this Madisonian homily.

Online versions are posted at: http://oll.libertyfund.org/titles/816 and http://quod.lib.umich.edu/e/evans/N22012.0001.001?rgn=main;view=fulltext. A printed version is contained in Ellis Sandoz, Political Sermons of the American Founding Era (Indianapolis: Liberty Fund, 1998).