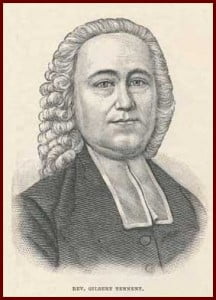 Today in Presbyterian History we celebrate the birth of Gilbert Tennent. Subscribers to our posts will remember his name and history as the celebrated pastor-evangelist of the First Great Awakening in the American colonies. His name will always be remembered as the one who preached about the dangers of unconverted ministers. He both began and ended the New Side wing of the American Presbyterian church in the mid-seventeen hundreds. And he was born on this day, February 5, in County Armagh, Ireland, in the year 1703.

He was to stay with his father and mother, William and Catherine Tennent, in Ireland for the first fourteen years, before the entire family emigrated to the American colonies, and specifically Pennsylvania, due to connections of a close family member of his mother.

We read very little of his early life with the exception of the one great spiritual experience which brought him to Christ around the age of fourteen. He had a serious concern about his salvation around that time. Indeed his mind and heart was in a great agony of spirit. Finally, it pleased the Lord to give him the light of the knowledge of saving grace.

It is clear that what led up to this saving knowledge was the godly training he received in his home schooling by his parents. Both of his parents, beside being Christians, were Christians of the Presbyterian faith. It is true that his father, William, was then a deacon in the Anglican church, albeit Presbyterian in theology and government. When the latter emigrated to America, he immediately sought acceptance in the Presbyterian Church. Further, Gilbert’s mother, Catherine nee Kennedy, was a daughter of a Presbyterian minister.

We could only guess, but it would be an educated one, that the home schooling that Gilbert, his three brothers (all of whom became Presbyterian ministers in America), and his sister all received came from a solid foundation in the great Calvinistic truths of the Reformation.

Solomon in Proverbs 22:6 wrote a general promise which reads, “Train up a child in the way he should go, Even when he is old he will not depart from it.” The background of the first phrase of “train up” comes from a beautiful picture which means “across the roof of.” The picture is that of a new born infant, who has the experience of some grape juice spread across the roof of the mount. As he or she tries to get that pleasant tasting juice off the roof of the mouth, he or she is then placed at the mother’s breast to crave the life-giving milk. The verb came to mean “to create a desire.”

Now granted, only the Holy Spirit can accomplish that creation of spiritual desire. But we can co-operate with that Spirit to create that spiritual desire in our children. There was no doubt that the home training of the Tennent family in its early days was instrumental in accomplishing much spiritual training in Gilbert Tennent.

Words to Live By:
Speaking to the parents who read This Day in Presbyterian History, are you taking spiritually and seriously the command of Proverbs 22:6 to train your children in the fear and admonition of the Lord? Pray and continue to work much in this vital home training.