The Westminster Abbey of the United States
by David T. Myers

The title of this post came from a remark made in the latter part of the eighteen hundreds describing the Cemetery of Princeton, New Jersey. And that description is justified by the saints who make up the “inhabitants” of this historic cemetery.

This author has chosen the birthday of March 18, 1837 of the twenty-second and twenty-fourth president of the United States, Grover Cleveland, as our introduction to our post today. The son of a Presbyterian minister, he was the only President from New Jersey And while he was a Presbyterian during his time in the White House, by his own admission he did not focus on that religious affiliation, like Benjamin Harrison did when he was the president between Cleveland’s terms. After his role as the chief executive in our nation’s capitol, Grover Cleveland returned to New Jersey, and specifically Princeton, New Jersey for eleven years until his death. The White House still sends a wreath and a military escort to place on his grave on this day of his birth.

But he is just one of the many notable persons who are buried in this “Westminster Abbey”. For our purposes, we are much more interested in the spiritual “greats” of Princeton Theological Seminary, that great school of the prophets, from its beginning in 1812 up until 1929, when it was still the bastion of Biblical and Reformed theology in the Presbyterian church. 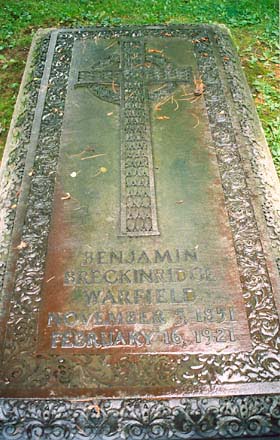 Of this one great family, A. A. Hodge once said, “I never go to Princeton without visiting the graves of the Alexanders – father and sons – and I never think of them without having my poor staggering faith in God and in regenerated humanity strengthened. Let us uncover our heads and thank God for them.”

The cemetery, which is still receiving burials, is under the oversight of Nassau Presbyterian Church, PCUSA, in Princeton, NJ.

Here is a quiz for our readers: J Gresham Machen and Geerhardus Vos are NOT buried in this Westminster Abby of the United States. Where are they buried? (And you cannot Google it!)

Words to Live By:
Countless newer churches in our Presbyterian and Reformed denominations do not set aside land for a cemetery. Of this omission, we are sad, for church cemeteries are spiritually uplifting sites. Yes, there are humorous stones, like one on a tombstone in Princeton’s Cemetery, “I told you I was sick!” But primarily, Christian memorials are witnesses to the grace and glory of God. As we read them, our poor staggering faith in God and in regenerated humanity is strengthened. Yes, we can have monuments of grace in city cemeteries, like that of Edward and Eleanor Kellogg’s monument in Leesburg, Virginia, which states at its bottom, “Saved by Grace.” That is a continuing witness to all who pass by. But so are those monuments in church cemeteries. Press for a cemetery for your church.