Our post today is drawn from the scrapbooks of the Rev. Henry G. Welbon, and the following news clippings gathered by him concern the ecclesiastical trial of the Rev. J. Gresham Machen.  With their General Assembly’s Mandate of 1934, the Presbyterian Church in the United States of America (PCUSA) had ordered all the members of Independent Board for Presbyterian Foreign Missions (IBPFM) to leave that body or be disciplined by the courts of the church. The IBPFM was a ministry started under the leadership of the Rev. J. Gresham Machen, and for his refusal to cease his involvement with that organization, he was suspended from the ministry of the PCUSA on March 29, 1935. His appeal was to be considered at the General Assembly of 1935, which was to begin soon thereafter. The trials of eight other ministers had already been initiated. As one commentator has noted,

The same church that had suspended Dr. Charles A. Briggs for heresy in 1893, had, in 1935, suspended Dr. J. Gresham Machen from its ministry for his faithful adherence to the Word of God. [—David C. Sinding, in “Roy Talmage Brumbaugh: Bible Presbyterian Pioneer in the Northwest”]

What amazing changes occurred in the space of a short thirty-eight years! Now think back over your own life, and what remarkable changes have taken place. Would you ever have thought we could be in such a place as we now find ourselves? But more remarkable still, remember that in all of this, God remains sovereign over human history. He can bring judgment or He can bring blessing. In the blink of an eye, He can bring reformation and revival to a blighted land. Are you praying?

The following news clippings are not presented in a large format, so as a courtesy we have provided accompanying transcripts:

Dr. Machen was charged on several counts with defying the mandates of the General Assembly of the Church which had ordered him to resign from the Independent Board for Presbyterian Foreign Missions. The Independent Board had been organized by the Fundamentalists in the church in protest to what they charged were Modernistic tendencies in the regular board. The latter board has denied that it is unorthodox and the General Assembly has upheld it.

The special judicial commission of the Presbytery of New Brunswick, sitting in the old First Presbyterian Church here, found Dr. Machen guilty on six counts but recommended that execution of the sentence be deferred until he has exhausted the last church court of appeal.

After hearing the sentence read by the Rev. Dr. Cordie J. Culp, chairman of the commission, Dr. Machen in a statement given to the press called the conduct of the trial a “farce.”

Dr. Machen announced that he would appeal to the Synod of New Jersey within the 10 days allotted to him. He maintained that he had not been given an opportunity to present his side of the case because the commission refused to listen to arguments concerning the constitutionality of the assembly’s order.

He also charged that the commission’s refusal to listen to arguments concerning doctrine vitally harmed his defense.

The commission went on record as disapproving emphatically “the unethical conduct of the defendant in issuing to the press during the progress of the trial statements which not only reflected upon the integrity of the court, but the truth of which have been by no means established. Such conduct in a civil court could only have resulted in punishment by contempt.”

The specific charges on which Dr. Machen was tried were: “Disapproval, defiance and acts contrary to the government and discipline of the church; failure to maintain the peace of the church; refusal to subject himself to his brethren in the Lord; violation of his ordination vows; breach of his lawful promises, and contempt and rebellion against his superiors in the church.”

Members of the commission, in addition to Dr. Culp, are the Rev. Edward Allen Morris, secretary and pastor of the church in which the trial was held; the Rev. John E. Kuisenga,, of Princeton Theological Seminary, and Elders William A. Cooley, John H. Hankinson and Henry B. Kummel. They were unanimous in their decision. 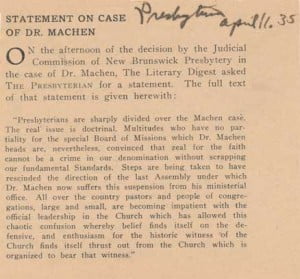 On the afternoon of the decision by the Judicial Commission of New Brunswick Presbytery in the case of Dr. Machen, The Literary Digest asked The Presbyterian for a statement. The full text of that statement is given herewith:

“Presbyterians are sharply divided over the Machen case. The real issue is doctrinal. Multitudes who have no partiality for the special Board of Missions which Dr. Machen heads are, nevertheless, convinced that zeal for the faith cannot be a crime in our denomination without scrapping our fundamental Standards. Steps are being taken to have rescinded the direction of the last Assembly under which Dr. Machen now suffers this suspension from his ministerial office. All over the country pastors and people of congregations, large and small, are becoming impatient with the official leadership in the Church which has allowed this chaotic confusion whereby belief finds itself on the defensive, and enthusiasm for the historic witness of the Church finds itself thrust out from the Church which is organized to bear that witness.”