“The Essential Rights and Liberties of Protestants” by Elisha Williams (Mar. 30, 1744) 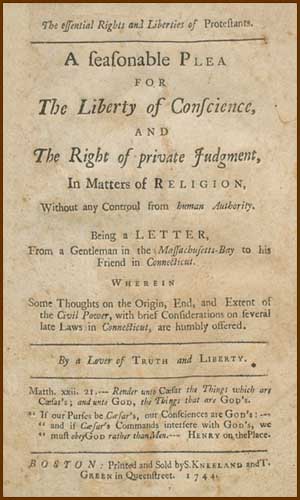 The great grandson of several New England families (John Cotton’s among them), Elisha Williams (1694–1755) graduated from Harvard in 1711. After a brief career of teaching and tutoring in 1722 he became the pastor of a congregational church in Wethersfield, Connecticut, prior to becoming and serving as the Yale rector from 1726-1739. His abilities as a scholar show why Yale was attracted to him, and his acumen shines through in this essay. After 1739, he ended his time at Yale, and some believed he was interested in serving in the Governor’s chair. After his Yale tenure, he served in the Connecticut legislature (1740-1749) and even temporarily as a Connecticut Supreme Court Judge—a pretty uncommon role for a pastor. A year before his death, he served in the Albany Congress with Benjamin Franklin to begin to plan for an American union. This sermon or essay was likely a reaction to a 1742 statute (in a climate of Revivalism) that prohibited pastors from preaching outside of their own pulpit. In what follows, one finds a learned and lucid articulation of the role of government and its interface with religion. Moderns would do well, at least, to be familiar with this.

This message is both one of the earliest and one of the lengthiest of the genre. Delivered a generation prior to military conflicts, this was not a typical sermon (although it is often associated with such because of its overt religious orientation). Williams was attempting to address the challenging relationship of church and state (“the extent of the civil magistrate’s power respecting religion” in his words). Mutually affirming the sole authority of Scripture, while also aware of abuses from an improper union of church and state, Williams set out to defend this proposition: “The more firmly this is established in our minds; the more firm shall we be against all attempts upon our Christian liberty, and better practice that Christian charity towards such as are of different sentiments from us,”

First, he addressed the Origin and End of Civil Government. Williams believed that reason led to certain conclusions (and in this tract he frequently cited “Mr. Lock” as the authority). Among them, humans had a natural freedom defined as: “This natural freedom is not a liberty for every one to do what he pleases without any regard to any law; for a rational creature cannot but be made under a law from its Maker: But it consists in a freedom from any superiour power on earth, and not being under the will or legislative authority of man, and having only the law of nature (or in other words, of its Maker) for his rule.” Flowing from this was the right to property, the right to elect leaders, and also the need for government and constitutions.

Williams’ segue to his second topic is: “Hence then the fountain and original of all civil power is from the people, and is certainly instituted for their sakes; or in other words, which was the second thing proposed, The great end of civil government, is the preservation of their persons, their liberties and estates, or their property.”

The third focal point is: “What liberty or power belonging to man as he is a reasonable creature does every man give up to the civil government whereof he is a member. Some part of their natural liberty they do certainly give up to the government, for the benefit of society and mutual defence (for in a political society every one even an infant has the whole force of the community to protect him), and something therefore is certainly given up to the whole for this purpose.” He identified what is freely given up in order to have good government under two heads: “1st. The power that every one has in a state of nature to do whatever he judgeth fit, for the preservation of his person and property and that of others also, within the permission of the law of nature, he gives up to be regulated by laws made by the society, so far forth as the preservation of himself (his person and property) and the rest of that society shall require.” Secondly, “the power of punishing he wholly gives up, and engages his natural force (which he might before employ in the execution of the law of nature by his own single authority as he thought fit) to assist the executive power of the society as the law thereof shall require.”

Returning to the central question of the government’s duty toward religion, Williams asserted: “Should a government therefore restrain the free use of the scriptures, prohibit men the reading of them, and make it penal to examine and search them; it would be a manifest usurpation upon the common rights of mankind, as much a violation of natural liberty as the attack of a highwayman upon the road can be upon our civil rights.” Nevertheless, there was not to be creedal coercion by the civil governor; each citizen (assumed to be a believer) retained the right of private, independent judgment. Later Williams will deduce that “the civil authority has no power to make or ordain articles of faith, creeds, forms of worship or church government.” To do such would be to establish religion; and these explicit limitations should be allowed to define the originalist meaning of “establishment.” In an extended comment, he sets forth this view:

But here you will say, ‘Tho’ they have no authority to establish a religion of their own devising, yet have they not authority to establish a pure religion drawn out of the sacred scriptures, either by themselves or some synodical assemblies, and oblige their subjects upon (at least) negative penalties to receive the same[?]’ This I shall endeavour fairly to consider when I have observed, that if by the word establish be meant only an approbation of certain articles of faith and modes of worship, of government, or recommendation of them to their subjects; I am not arguing against it. But to carry the notion of a religious establishment so far as to make it a rule binding to the subjects, or on any penalties whatsoever, seems to me to be oppressive of Christianity, to break in upon the sacred rights of conscience, and the common rights and priviledges of all good subjects. For let it be supposed as now pleaded, that the clergy or a synodical assembly draw up the articles and form of religion, agreeable in their judgment to the sacred scriptures, and the reception of the same be made binding by the civil authority on their subjects; It will then follow, That all such establishments are certainly right and agreeable to the sacred scriptures.

He continued to maintain that it was impossible “that any can have right or authority to oblige Christians to believe or practice any thing in religion not true or not agreeable to the word of God: Because that would destroy the sacred scriptures from being the only rule of faith and practice in religion to a Christian. If the sacred scriptures are his rule of faith and practice, he is oblig’d and that by God himself, to believe and practice accordingly.” With impressive clarity, he asserted:

No man therefore, or order of men, can have any right or power to oblige the Christian to believe or do any thing in religion contrary to, or different from, what God has obliged him: The position of the one is the removal of the other. This then is certain, that if this proposition be true, that a humane religious establishment is a rule binding to Christians, or that the civil authority have power to oblige their subjects to receive them; then they are always right and agreeable to God’s word; but the latter is not true; therefore the proposition is false. Humane establishments in matters of religion, carry in them no force or evidence of truth. They who make them are no ways exempt from humane frailties and imperfections: They are as liable to error and mistake, to prejudice and passion, as any others. And that they have erred in their determinations, and decreed and established light to be darkness, & darkness to be light, that they have perplexed the consciences of men, and corrupted the simplicity of the faith in Christ, many councils and synods and assemblies of state are a notorious proof. . . . If therefore the civil authority has a power to make a religious establishment binding to the subjects; those six articles [ed. from Henry VIII in 1540] were true, tho’ they contained abominable absurdities, and amazing falshoods; and the people were obliged to believe them, and those who suffered for disbelieving them suffered justly.

Sounding a note that would be amplified a few decades later, this preacher affirmed that, “Every society ought to be subject only to its own proper legislature.” On the flip side of that autonomy, no ruler could coerce the conscience of religious subjects, for “The ground of obedience cannot be extended beyond the ground of that authority to which obedience is required.”

Williams showed his Protestant heritage, affirming an idea popularized centuries earlier by Beza, by Mayhew shortly thereafter, and others, namely “that every law not contrary to a superior law is to be obeyed.” In this fashion, submission was limited.

Since this piece is so long, there is much more that can be profitably read. Thus, we are happy to commend this piece of early American political theology to readers. Find it available in Ellis Sandoz, Political Sermons of the American Founding Era (Indianapolis: Liberty Fund, 1998); or it is online at: http://consource.org/document/the-essential-rights-and-liberties-of-protestants-by-elisha-williams-1744-3-30/.

Image source: Title page of sermon by Elisha Williams, as displayed on the Princeton University Digital Library, at http://pudl.princeton.edu/objects/q811kk37n