The day of the debate had brought a crowd of Presbyterian elders to the sanctuary of the Fourth Presbyterian Church on that day of April 11, 1933.  The topic was “Modernism on the Mission Field.”  And the two individuals engaging in the debate were two “heavies” on opposite sides of the issue. 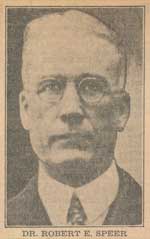 Dr. J. Gresham Machen was the recognized leader of the conservatives in the Presbyterian Church, U.S.A.  Founder and president of Westminster Theological Seminary in Philadelphia, Pennsylvania, he was still a member minister of the New Brunswick, New Jersey Presbytery, though he had tried unsuccessfully to transfer to the Philadelphia Presbytery.  Against him was Dr. Robert Speer, present head of the Board of Foreign Missions of the Presbyterian Church, U.S.A.

Dr. Machen began his presentation with a proposed overture from the Presbytery of New Brunswick to the General Assembly of 1933.  The first two of four parts are the key ones, which I will quote word for word from the April 1933 Christianity Today article, and sum up the other two.

Point 1 of his overture was: “To take care to elect to positions of the Board of Foreign Missions only persons who are fully aware of the danger in which the Church stands and who are determined to insist on such verities as the full truthfulness of Scripture, the virgin birth of our Lord, His substitutionary death as a sacrifice to satisfy divine justice, His bodily resurrection and His miracles, as being essential to the Word of God and our Standards, as being necessary to the message which every missionary under our church shall proclaim.”

In essence, this first proposition simply summed up the Declarations of the General Assembly’s five fundamentals which were considered as essential for the Church, its boards, and its ministers.  It specifically repudiated the denials of the same by the Auburn Affirmation in 1924.

Proposition 2 of the proposed overture sought to “instruct the Board of Foreign Missions that no one who denies the absolute necessity of acceptance of such verities by every candidate for this ministry can possibly be regarded as a candidate to occupy the position of Candidate Secretary.”

This proposition addressed the important place which the Candidate Secretary has in ascertaining the theological convictions which each missionary candidate has to serve on the Foreign Field.  In other words, in people such as Pearl Buck, who was openly denying the exclusiveness of the gospel of Christ, it is obvious that the Candidate Secretary had “missed the boat” in approving her as being a missionary to China.

The third proposition summed up that those who held that the tolerance of opposing views was  more important than an unswerving faithfulness in the proclamation of the Gospel as it is contained in the Word of God, show themselves to be unworthy of being missionaries of the cross.

This proposition was aimed at those who had accepted the fundamental viewpoint of the book, “Rethinking Missions,” that denied the exclusivity of the gospel.

The last proposition sought to warn the Board of the great dangers lurking with union enterprises in view of wide-spread error.

Dr. Speer for his part of the “debate” simply dismissed each of the overture propositions.    When the vote was taken on Dr. Machen’s proposed overture, it was voted down by the Presbytery of New Brunswick, with a majority voting in favor of confidence in the Board of Foreign Missions.  Dr. Machen, Rev. Samuel Craig, and Dr. Casper Wistar Hodge asked that their names be recorded in dissent of the motion.

Words to Live By:  We are always called upon to stand faithfully for the gospel.  The results on this earth may be not what we have hoped for, but the results in the General Assembly of heaven are what counts for time and eternity.