Our guest author for our current Saturday series on Election Day Sermons, Dr. David W. Hall, is taking a well-deserved break today while he attends to some pressing pastoral matters. With great trepidation then I’m taking his place today, and have the following to offer, and only mostly tongue-in-cheek, have found this sermon by the Rev. Lyman Beecher, titled A Remedy for Duelling. A most fitting election day sermon, don’t you think?  Well, maybe not. Maybe not on several levels, in fact. Anyway, . . . .

Duelling was serious problem in the early days of this nation. What began as a practice among the nobility in Europe had no class boundaries when brought to America’s shores. So today we will look briefly at one earnest sermon against the practice, delivered first before his own congregation and then before the Presbytery of Long-Island, by the Rev. Lyman Beecher. The year was 1809 and Beecher’s sermon was considered by his peers as worthy of a large edition at a low price, for wide publication of the arguments presented. Perhaps the so-called drive-by shooting is our nearest modern counterpart. The former was called “one of the foulest blots on our national character,” and the latter certainly deserves that title as well.

The published edition of the sermon begins with a Preface, rehearsing the decision made by the General Assembly of the Presbyterian Church, U.S.A. in 1805, declaring “their utter abhorrence of the practice of duelling,” . . . “utterly inconsistent with every just principle of moral conduct;” “a direct violation of the sixth commandment, and destructive of the peace and happiness of families.” In calling its ministers to action, the Asssembly urged pastors to “refuse to attend the funeral of any person who shall have fought a duel, and that they admit no person, who shall have fought a duel, given or accepted a challenge, or been accessory thereto, unto the distinguishing privileges of the church, until he manifest a just sense of guilt, and give satisfactory evidence of repentance.”

“And Judgment is turned away backward, and Justice standeth afar off; for Truth is fallen in the streets, and Equity cannot enter.”—Isaiah 59: 14-15.

So having picked up his text, Rev. Beecher began: 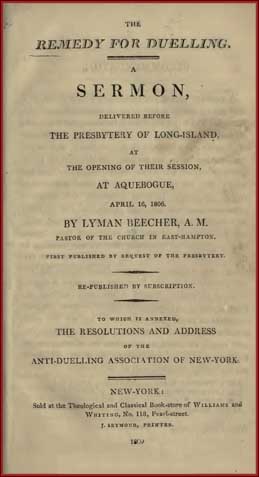 “The people of Israel, when this passage was written, had become exceedingly corrupt, and were sinking under the pressure of awful judgments. But although hardened in sin, they are not insensible to misery; and though regardless of God as their benefactor, they murmur and tremble before him as the author of their calamities.

Beecher’s sermon is simply too long to rehearse here. Forty pages long, in good early 19th-century fashion! But to focus on just one portion of his sermon, and here is where I think Beecher speaks in principles that cross over readily for contemporary application, he continues with a major point we will look at closer:

4. The system of duelling is a system of absolute despotism, tending directly and powerfully to the destruction of civil liberty. A free government is a government of laws, made by the people for the protection of life, property, and reputation. A despotic government is where life and all its blessings are subject to the caprice of an individual.

So dueling is a threat to civil liberty. How so? Beecher explains:

(1.) Equal laws are essential to civil liberty, but equal laws are far from satisfying the elevated claims of duellists. That protection which the law affords to them in common with others, they despise. They must have more–a right to decide upon and to redress their own grievances.

Thus duelling is a form of vigilantism, a taking of the law into your own hands.

(2.) The administration of justice ought, above all things, to be impartial; the rich and the honourable to be equally liable to punishment for their crimes with the poor, and, according to their desert, punished with equal severity. But while duellists bear sway, this can never be. It is a fact in this state, at the present moment, that the man who steals a shilling is more liable to detection, and more sure to be punished, and to experience a heavy penalty, than the man who, in a duel, murders his neighbor.

Duelling survives because the crime is not punished; a system has developed that protects the practice.

(3.) A sacred regard to law is indispensable to the existence of a mild government. In proportion as obedience ceases to be voluntary, and the contempt of law becomes common, must the nerves of government be strengthened, until it approach in essence, if not in name, to a monarchy. We must have protection; and the more numerous and daring the enemy, the more power must be delegated to subdue and control them. That contempt of law, therefore, which is manifested by the duellist, is a blow at the vitals of liberty.

Duelling tramples our rights and freedoms:

(4.) The tendency of duelling to restrain liberty of speech and of the press, is certainly direct and powerful. The people have a right to investigate the conduct of rulers, and to scrutinize the character of candidates for office; and as the private moral character of a man is the truest index, it becomes them to be particular on this point. But who will speak on this subject? Who will publish, when the duellist stands before him with pistol at the breast?

(5.) Duelling, in its operation, exposes, to additional risk and danger, those who would rise to usefulness and fame in civil life. With what views can a Christian parent look to the law as a profession for his son, where, if he rise to fame, he must join the phalanx of murder–or if he refuse, experience their united influence against him?

Words to Live By:
As Rev. Beecher continued, his solution seemed to boil down to denying public office to those who supported the practice of dueling. This evil had infected what amounted to the ruling class of the young nation. But apart from urging his listeners to action and specifically to the polls, Beecher closes with the admission that “It is the gospel which must heal the nations; and the more the spirit of the gospel can be diffused, and made to express itself in the arrangement of society, the more will the world recover from its deadly wound. Salvation belongs to the Lord. So too any true change for the better in any society. To read the full sermon, click here:  A Remedy for Duelling (1809).