Today we grateful to have another post from guest author Barry Waugh:

Just north of Lexington, Kentucky, heading east for about two miles from exit 120 of Interstate 75 along Ironworks Pike through the scenic bluegrass horse farms with their rail fences and white barns is located a stone building that is Mt. Horeb Presbyterian Church. Though not a large church building, those gathered for its organization in an earlier church on the site many years ago were important figures in the history of the American Presbyterian Church. Along side the road in front of the simple building is a State Historical Marker donated by the Kentucky Breckinridge Committee which reads: 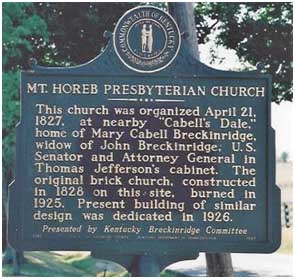 This church was organized April 21, 1827, at nearby “Cabell’s Dale,” home of Mary Cabell Breckinridge, widow of John Breckinridge, U.S. Senator and Attorney General in Thomas Jefferson’s cabinet. The original brick church, constructed in 1828 on this site, burned in 1925. The present building of similar design was dedicated in 1926.

Mary Cabell Breckinridge was also known as “Polly.” When her husband John died in 1806 she remembered him by wearing a black mourning hat for the remainder of her life which earned her the family nickname of “Grandma Black Cap.” In addition to Mary Cabell in the organizing congregation were Mary Clay Smith Breckinridge, Ann Sophonisba Preston Breckinridge, Sophia Rice Harrison, and the only male congregant and first elder of the small flock, William Lewis Breckinridge. Two of the Presbyterian clergy in the organization of the church enjoyed a Breckinridge-Cabell family connection, John Breckinridge and Joseph Cabell Harrison, but the third minister, Charles Phillips, appears not to have been a branch on the Breckinridge-Cabell family tree.

The first of the kin gathered at Cabell’s Dale was Mary Clay Smith Breckinridge who was Rev. John Witherspoon’s granddaughter by his daughter, Ann, who was married to the Presbyterian minister, Samuel Stanhope Smith. Witherspoon had been the president of Princeton College, 1768-1794, and his term was followed by that of his son in law, Smith, 1795-1812. . . .

TO CONTINUE READING ABOUT MARY CABELL BRECKINRIDGE AND HER FAMILY, CLICK HERE TO GO TO THE PRESBYTERIANS OF THE PAST WEBSITE.