Recently a friend was inquiring about the history of the Reformed Presbyterian Church, General Synod, which in 1965 merged with the original group known as the Evangelical Presbyterian Church [not the current ongoing denomination]. As explained below, this message was presented by the Rev. Harry Meiners at the occasion of the merger of these two denominations, though our post today is a shorter previous version that Rev. Meiners had prepared in 1961. Perhaps another day we will post the longer edition. 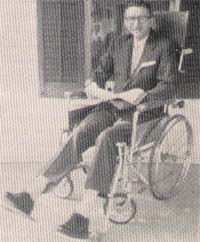 At this historic Uniting Service the Stated Clerk of each of the two uniting churches has been asked to present a history of his respective church, limiting himself to eight minutes. My colleague has twenty-nine years to cover. The official history of the Reformed Presbyterian Church in Reformation Principles Exhibited begins with Adam and Eve! I shall endeavor, however to confine myself to a sketch of the past three hundred years.

The Reformed Presbyterian Churches in America are the lineal descendants of the Reformation Church in Scotland, and therefore, date back to the year 1560 for their origin. The General Synod and the Synod of today (divided in 1833) can, without one link broken, claim that they stand upon the platform of the Reformed Church in Scotland in those days of the second Reformation during the years 1638-1649. Then the Solemn League and Covenant was entered into, and the National Covenant of 1580 renewed.

These well-know covenants gave rise to the name “Covenanters,” so famous in Scottish history. Their persecution, from 1680 to 1688, forms a bloody page in the history of that country. The Sanquhar Declaration, made June 22, 1680, by Rev. Richard Cameron and his Covenanter followers, contains some of the germs of our own American Declaration of Independence. The Covenanters, loyal to King Jesus, could not accept the Erastian (Anglican or Episcopal) terms of the Revolution Settlement of 1668 – a position subsequently endorsed by the formation of the Free Church of Scotland in 1843. The Reformed Presbytery was re-constituted in Scotland in 1743 by Rev. John McMillan and Rev. Thomas Nairn. From the middle of the seventeenth century, there had been an emigration from the Reformed Presbyterian Churches in Britain and Ireland to the then American colonies or plantations. Many of these Covenanters had been actually banished by their persecutor, and many more were voluntary exiles for the Word of God and the testimony which they held. They came at first to the Carolinas, and then spread through

Tennessee and Kentucky. By way of Philadelphia they spread themselves over the states of Pennsylvania, Maryland, and Virginia. Later they came to New York and spread out through that state and on to northern and western localities. In 1752 Rev. John Cuthbertson arrived from Scotland and labored for twenty years among these scattered people. Most of them did not join other organized and existing churches. The Reformed Presbytery of America was constituted in 1774, and then re-organized in the city of Philadelphia in the spring of 1798. The first Synod was constituted in 1809 in Philadelphia; it became a delegated body in 1823. There was an unhappy division in 1833, upon the question of civil relations. The Synod of the Reformed Presbyterian Church of North America is the group that maintained that because the United States Constitution does not officially recognize Jesus Christ as Head of the nation, the Christian should not vote nor hold public office. The Reformed Presbyterian Church in North America, General Synod does urge its members to vote and to hold public office. Today there are other differences between these two bodies — but there are cooperative relations between them and perhaps someday they may again join and work together.

The Theological Seminary of the General Synod was founded in 1807 in Philadelphia. Foreign Missions work was begun in India in 1836 and continues to this day. In northern India we have two mission stations and five congregations of national Indian Christians. Today the church also conducts mission work in Seoul. Korea (begun 1959) and Houston, Kentucky (begun 1907).

For a number of years the church grew smaller. There were congregations that left when there was a proposal to unite with the Presbyterian Church in the U.S.A. Others left when some wanted to use a musical instrument in public worship–those who opposed this departed. Others left when Synod voted to permit the use of hymns as well as Psalms in worship services.

Today we are growing again. There are now 23 congregations in the U.S., comprising three Presbyteries. There are 33 ordained ministers in the U.S., one in Korea, 7 in India. Total communicant membership is 2,500 in the U. S. and 180 in India. In India the Saharanpur Presbytery comprises five congregations. In America churches are located in Connecticut, New York, Pennsylvania. Kentucky, Indiana, Illinois. Kansas, and New Mexico. The church does not have its own college or seminary, but two of its ministers are teaching–Dr. Gordon H. Clark at Butler University and Dr. Charles F. Pfeiffer at Central Michigan University. The church employs a General Secretary, its only full-time servant of the denomination at large. All other denominational officers are pastors of local congregations or elders.

Young people’s conferences are held each summer by the Pittsburgh and Western Presbyteries and the Philadelphia Presbytery sends many of its youth to the Quarryville Bible Conference. All Presbyteries in the United States have Women’s Presbyterials.

The denomination publishes an official magazine, The Reformed Presbyterian Advocate, now in its 99th year of publication. It is published monthly October to May and bi-monthly June to September at $2.00 per year.

Union with the Evangelical Presbyterian Church has been worked on for several years, voted on favorably in 1964, and will be consummated in April, 1965. Thus these two churches hope to have a stronger witness to Biblical orthodoxy of a Reformed and Presbyterian nature in our generation.