We are a few days off from the anniversary of this event, but other scheduled posts bumped this post to today. Close enough, for our purposes, I think. 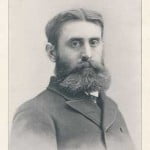 In the late 19th century, an effort was begun to revise the Westminster Confession of Faith and the Larger and Shorter Catechisms, as held by the Presbyterian Church in the U.S.A. This effort toward revision was led by Charles A. Briggs and several other then prominent men in that denomination. Opposing them, among others, was the Rev. Dr. Benjamin B. Warfield, professor at the Princeton Theological Seminary. Here he presents some of his earliest arguments in countering the revisionists:—

THE PRESBYTERY OF NEW BRUNSWICK AND THE WESTMINSTER CONFESSION.

At the June intermediate meeting of the Presbytery of New Brunswick, held on June 25th at Dutch Neck, the overture of the General Assembly anent the revision of the Confession of Faith was answered in the negative, nemine contradicente, as follows :

“The Presbytery of New Brunswick, having carefully considered the overture in relation to the revision of the Confession of Faith, proposed by the General Assembly, respectfully replies as follows :

“This Presbytery does not desire any revision of the Confession of Faith.”

The reasons to be assigned for this answer, as proposed in a paper presented by Prof. B. B. Warfield, were then taken up ; but, on account of lack of time for full consideration, were laid over until the October meeting of the Presbytery. These reasons have been printed by order of the Presbytery, that all who are interested may have opportunity to consider them before the Fall meeting. They are as follows :

Words to Live By:
Our Confession of Faith can be thought of as a commentary on what the Scriptures teach. As such, it serves to bring unity, when we jointly concur that the Confession summarizes some of the central doctrines taught in the Scriptures. It also serves as a public notice of what will be taught in our churches—think of it as something akin to a truth-in-advertising document : As the Confession is our agreed upon Standard, visitors to our churches should be able to expect a faithful proclamation of the Gospel from our pulpits and teachings that are in accord with the Westminster Standards. For these reasons and more, efforts to revise our Confession should be considered with the greatest care and reluctance. It’s not that the Confession is inerrant or incapable of further perfection, but changes should be soundly Biblical, vested with much prayer, and always with a clear purpose to glorify our Lord and Savior. The changes that eventually were made in 1903 proved damaging to the PCUSA, weakening the Calvinism of the document and thus paving the way for the 1906 reception of the larger portion of the Cumberland Presbyterian Church [about 1000 pastors and 90,000 members]. This was a denomination that historically had opposed Calvinism and taught Arminianism.

Let us hold fast the confession of our hope without wavering, for He who promised is faithful.—Hebrews 10:23 (NASB)