He Was OP, RP, EP and RPCES 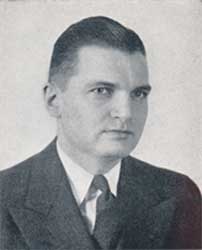 That tag line will bring back for some of our readers the famous Dameron and Jones song. Others, not so blessed, will draw a blank. The Rev. Richard W. Gray was the living expression of that song:  “We’ve been OP, BP, and RPCES. What we’ll be next is anybody’s guess.”

Richard Willer Gray was born in Brooklyn, New York on June 6, 1911. After the age of 12 he lived in Philadelphia, Pennsylvania, until moving to attend Wheaton College, from 1930-1934. Following graduation from Wheaton, he received the M.Div. at Westminster Theological Seminary, in 1937. In 1936, a year before graduation from Westminster, he married Emily MacDonald. To this marriage, three children were born. Their son Richard is himself a PCA pastor, serving in Florida.

Rev. Gray was ordained by the Presbytery of New Jersey on May 18, 1937 and installed as pastor of the Covenant OPC church of East Orange, New Jersey. He served this church from 1937 until 1945. Resigning that post, he then answered a call to serve Calvary Orthodox Presbyterian Church, in Bridgeton, New Jersey [now New Hope OPC], serving there from 1946-1949. His third pastorate was with the Calvary Presbyterian Church of Willow Grove, Pennsylvania, which at that time was an independent church. Rev. Gray served this church from 1949 to 1958, and during these same years he was also the editor of a magazine, The Witness, a publication widely utilized by OPC, BPC and Reformed Presbyterian congregations. In April of 1958, Dr. Gray transferred his credentials to the Reformed Presbyterian Church, General Synod, leading his independent congregation into this denomination. By way of two later denominational mergers, the Willow Grove congregation is today a part of the PCA.

Pictured below, the building occupied by the Calvary OPC church of Bridgeton, New Jersey, where Rev. Gray served from 1946-1949. 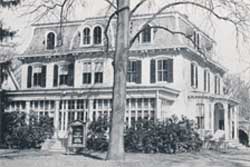 [This coming Sunday, June 16, we will feature Dr. Gray’s sermon delivered before the Synod on the occasion of the RP/EP merger in 1965. His sermon was titled, “Where Have We Been and Where Are We Going?”]

Rev. Gray never saw the merger of the RPCES with the PCA. Following the merger of the RPC,GS and the EPC, he had continued as pastor of the Calvary Presbyterian Church of Willow Grove until 1975. At that time he answered a call to serve as the founding pastor of the Presbyterian Church of Coventry, Connecticut. It was while serving as pastor of this church that the Lord called him to his final reward. He died on February 28, 1979.

Apart from his pastoral duties at the above four churches, Dr. Gray participated in a wide variety of denominational and intellectual activities. At various times he:

Edited a Christian magazine (The Witness)
Taught courses at a seminary
Was active in the establishment of four branch churches
Started the Christian Counseling Center of Willow Grove
Was active in the establishment of Christian schools
Wheaton College awarded him the honorary Doctor of Divinity degree in 1959
Served on the Board of Directors of National Presbyterian Missions; Quarryville Home; and Covenant College
Served as a chief architect of the union of the Reformed Presbyterian Church, General Synod and the Evangelical Presbyterian Church
Moderator of the 148th Synod of the Reformed Presbyterian Church, Evangelical Synod (1970)
Frequent moderator of denominational committees, regional presbyteries, and synodical reports
Founded the Christian Counseling Service in Coventry, Connecticut
Presided over the Evangelical Ministerial Association of greater Hartford

The people who fell under Dick Gray’s ministry were as diverse and varied as his multi-faceted personality, yet all found common ground in his infectious enthusiasm for the Kingdom of God.

From a young counselee: “I thank God for the vast help that Dr. Gray has been in my life. I came to him in desperate anxiety. He allowed me to expose all that was ugly and frightful. He was both utterly trustworthy and wisely insightful. God used him to lead me into the health and maturity and objectivity about myself which now is a part of my abundant and joy-filled life.”

From a ministerial colleague: “Although in God’s providence Dick and I were working on the most recent church problem from different sides of it, I want you to know that that in no way diminished my admiration and esteem for him as one of the God-given leaders to the RP Church. I  particularly appreciated his openness to new ideas and his willingness to encourage the young ministers. At the same time, no one could question his concern for the welfare of the churches and his tireless energy on their behalf.”

From a former elder and long-term friend: “[Dick] had a capacity for concentration and single-mindedness that was maddening, and a capacity for empathy that was healing. He could have written books of great significance, if he had the patience. He was one of only several individuals it was my privilege to know who had the mind of an intellectual explorer, a discoverer of principles, relationships between what are too often labeled ‘spiritual’ and ‘intellectual.’ He thought and wanted others to think, and this caused him undeserved difficulties because thinking is painful. He shunned superficial statements that would have won him acceptance among those believers who limit orthodoxy to set phrases. He bore the risk of being considered not Biblical enough, in order to be truly Biblical.”

Words to Live By:
“Then I realized that it is good and proper for a man to eat and drink, and to find satisfaction in his toilsome labor under the sun during the few days of life God has given him, for this is his lot. Moreover, when God gives any man wealth and possessions, and enables him to enjoy them, to accept his lot and be happy in his work; this is a gift of God. He seldom reflects on the days of his life, because God keeps him occupied with gladness of heart.” (Eccl. 5:18-20)