12 July, 2016 in Uncategorized by archivist | No comments

Just What Purpose Did They Serve, Really?

Some years ago, mention was made of an organization called The League of Faith. This group seems largely forgotten now, some eighty years later, but it was a conservative renewal group established to work within the Presbyterian Church in the U.S.A.  The history of this organization was played out in two stages, as described in Chapter 14 of The Presbyterian Conflict. 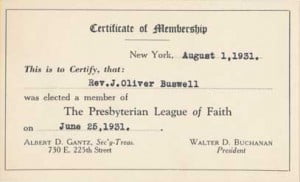 The League of Faith was originally organized in 1931, and was centered around the leadership of the Rev. Dr. Walter D. Buchanan, D.D. An initial membership of 150 included such prominent conservatives as J. Gresham Machen, Samuel G. Craig, Paul Woolley, Clarence E. Macartney, and many others. Judging from records preserved at the PCA Historical Center, the Rev. J. Oliver Buswell, Jr. was another founding member of the League, as witnessed in the Certificate of Membership pictured at right.

The objects of the League, as listed in Article 2 of its Constitution, were as follows:

1. To maintain loyalty to the Bible as the Word of God in opposition to denials of its full truthfulness.
2. To maintain the Reformed or Calvinistic system of doctrine as it is set forth in the Confession of Faith of the Presbyterian Church in the U.S.A. as it appears in 1931 in opposition to all plans of church union which would either break down that system or relegate it to a secondary place.
3. To oppose changes in the historic formula of creed subscription required of candidates for the ministry and the eldership.
4. To oppose the attack made by the document commonly called the “Auburn Affirmation” upon the doctrinal pronouncement of the General Assembly of 1923, and to insist, in opposition to that affirmation, that the full truth of the Scriptures, the Virgin Birth of Christ, the Substitutionary Atonement, the bodily Resurrection and Miracles of our Lord are essential doctrines of the Word of God and our Standards.
5. To warn men everywhere that salvation is to be obtained not by human merit or human effort to please God, but only through the redeeming work of our Lord and Saviour Jesus Christ as He is offered to us in the Gospel.
6. To encourage the vigorous defense and joyous propagation of the Gospel in its fullness as it is set forth in the Westminster Confession of Faith on the basis of Holy Scripture.

But apparently the organization never actually did anything. It met regularly, and its members talked, but no plan of action was ever adopted, much less acted upon.

It was this 1936 reorganization of the League that we find documented in a news clipping in one of the Rev. Henry Welbon’s scrapbooks. The newspaper was The Philadelphia Record, and the brief coverage of the League’s reorganization was described in this way:

Conservative clergymen within the Presbyterian Church in the U.S.A. have formed a league of Faith, with Dr. Clarence E. Macartney, of Pittsburgh, as their president.

More than 1000 attended recent organization meetings in New York. They declared that liberals and Modernists now dominate the Presbyterian Church although they represent but a small portion of its membership.

Then in 1937, just four short years before the United States entered the Second World War, the League subsequently led a successful fight in opposition to a proposed amendment to the 23d chapter of Westminster Confession of Faith, an amendment which would have put the Presbyterian Church on record as opposing all wars as sinful and unchristian. This appears to have been the League’s one victory, and eventually the organization simply disappeared off the pages of history.

We Might Wonder:
While the Presbyterian Church was but one of many denominations, what might have been the effect of such an amendment to the Confession, particularly at such a crucial moment in the nation’s history? Would other denominations have followed suite with similar pronouncements? Would the United States conceivably have then been kept out of the War, or perhaps delayed its involvement till some months or years later? Was the League of Faith a providence from God? Did their humble efforts leave this nation ready to enter the War at just the right time? This is all dangerous territory for any historian. Had that amendment been adopted, the rest of our national history might not have changed in the least. It is all too speculative, and we cannot read history in that way. In the end, we can only affirm with the Scriptures that God is indeed sovereign over human history. Nothing happens that is outside His plan, and everything is working toward the glorious culmination that He has in store for His elect children. But all too often . . . the Lord works in the most unexpected ways.