29 July, 2016 in Uncategorized by archivist | No comments 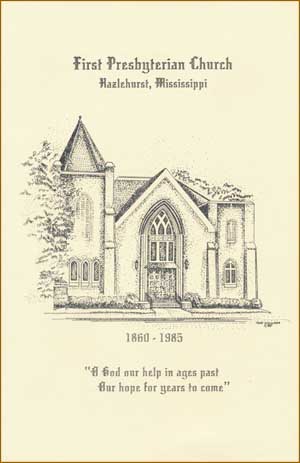 The initial entry in the Session Book of the Hazlehurst Church is as follows: “At a congregational meeting held on the fourth Sabbath of July, A.D. 1860 in the town of Hazlehurst, Reverend D. A. Campbell of the Presbytery of Clinton, of the Synod of Mississippi, proceeded to organize a church, to be received under the care of said Presbytery. The following persons were enrolled as members: M.W.Trawick, Elijah Peyton, A. W. Griffing, Mrs. Elizabeth Griffing, Mrs. Phebe I. Griffing, Mrs. Lucy M. Campbell, Mrs. Matilda Peyton.”

The house of worship was completed in 1867. Although the structure has been enlarged and remodeled several times, the original building remains almost intact. The first building consisted of what is now solely the sanctuary. Exterior brick were added in 1941, and the educational annex, to the rear of the Church, was dedicated in 1959.

The steeple bell was cast especially for the Church in 1867, a gift from Miss Isabella Faler. In 1901, the Ladies Aid Society purchased the sanctuary chandelier. The fixture originally burned acetylene gas, but in 1920 was wired for electricity. The pulpit furniture was donated to the Church in the early 1870s by the A. Mangold family.

When the Church was remodeled in 1941, the present sanctuary pews were installed. They are of walnut and are the third set of pews to be used in the Church. At the end of each pew is a small plate bearing the name of the donor.

The sanctuary windows were presented to the Church in 1964 as a memorial to the ministry of Samuel Craighead Caldwell, D.D., long time minister of this Church. The three stained glass windows in the Fellowship Hall today were in the sanctuary behind the pulpit from 1901 until 1964.

A memorial tablet in the vestibule was dedicated to the memory of Reverend Martin W. Trawick, the first minister of the Church, 1864-1874. A second memorial tablet was placed in remembrance of Samuel Craighead Caldwell, D.D., who served as minister for forty-two years, 1888-1930.

Sixteen regularly installed ministers have nurtured the spiritual growth of the congregation over these one hundred and fifty-five years since 1860. Our current Interim Pastor, the Rev. Larry C. Mills, has ministered to the flock for six years, and counting. This Church has been blessed with ministers who have faithfully preached the Word of God from the pulpit.