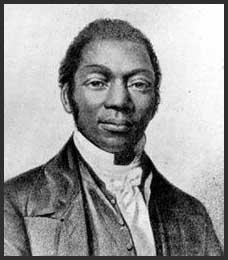 “I am an American to the Backbone.”

My time of late simply does not permit the writing of a proper biographical account of the remarkable life of James W.C. Pennington, who  was born in 1809 and who died in 1870, at the age of 63. To my knowledge, his exact birth and death dates are lost to us. But it was on this day, August 15th, in 1849, that he penned the Preface to his autobiography,“” THE FUGITIVE BLACKSMITH, an account of his time as a slave, his subsequent escape, and his eventual preparation for the Gospel ministry and his service as a pastor of several churches, among them the Shiloh Presbyterian Church in Manhattan, New York. It was during an earlier pastorate that Rev. Pennington wrote what is acknowledged as the first history of African Americans, THE ORIGIN AND HISTORY OF THE COLORED PEOPLE. (1841).

The following letter to his family, whom he had not seen in many years, is excerpted from the appendix to THE FUGITIVE BLACKSMITH (1849):—

These two letters are simply introduced to show what the state of my feelings was with reference to slavery at the time they were written. I had just heard several facts with regard to my parents, which had awakened my mind to great excitement.

To my Father, Mother, Brothers and Sisters.

About seventeen long years have now rolled away, since in the Providence of Almighty God, I left your embraces, and set out upon a daring adventure in search of freedom. Since that time, I have felt most severely the loss of the sun and moon and eleven stars from my social sky. Many, many a thick cloud of anguish has pressed my brow and sent deep down into my soul the bitter waters of sorrow in consequence. And you have doubtless had your troubles and anxious seasons also about your fugitive star.

I have learned that some of you have been sold, and again taken back by Colonel _____. How many of you are living and together, I cannot tell. My great grief is, lest you should have suffered this or some additional punishment on account of my Exodus.

I indulge the hope that it will afford you some consolation to know that your son and brother is yet alive. That God has dealt wonderfully and kindly with me in all my way. He has made me a Christian, and a Christian Minister, and thus I have drawn my support and comfort from that blessed Saviour, who came to preach good tidings unto the meek, to bind up the broken hearted, to proclaim liberty to the captives; and the opening of the prison to them that are bound. To proclaim the acceptable year of the Lord and the day of vengeance of our God; to comfort all that mourn. To appoint unto them that mourn in Zion, to give unto them beauty for ashes, the oil of joy for mourning, the garment of praise for the spirit of heaviness, that they might be called trees of righteousness, the planting of the Lord that he might be glorified.

If the course I took in leaving a condition which had become intolerable to me, has been made the occasion of making that condition worse to you in any way, I do most heartily regret such a change for the worse on your part. As I have no means, however, of knowing if such be the fact, so I have no means of making atonement, but by sincere prayer to Almighty God in your behalf, and also by taking this method of offering to you these consolations of the gospel to which I have just referred, and which I have found to be pre-eminently my own stay and support. My dear father and mother; I have very often wished, while administering the Holy Ordinance of Baptism to some scores of children brought forward by doting parents, that I could see you with yours among the number. And you, my brothers and sisters, while teaching hundreds of children and youths in schools over which I have been placed, what unspeakable delight I should have had in having you among the number; you may all judge of my feeling for these past years, when while preaching from Sabbath to Sabbath to congregations, I have not been so fortunate as even to see father, mother, brother, sister, uncle, aunt, nephew, niece, or cousin in my congregations. While visiting the sick, going to the house of mourning, and burying the dead, I have been a constant mourner for you. My sorrow has been that I know you are not in possession of those hallowed means of grace. I am thankful to you for those mild and gentle traits of character which you took such care to enforce upon me in my youthful days. As an evidence that I prize both you and them, I may say that at the age of thirty-seven, I find them as valuable as any lessons I have learned, nor am I ashamed to let it be known to the world, that I am the son of a bond man and a bond woman.

Let me urge upon you the fundamental truths of the Gospel of the Son of God. Let repentance towards God and faith in our Lord Jesus Christ have their perfect work in you, I beseech you. Do not be prejudiced against the gospel because it may be seemingly twisted into a support of slavery. The gospel rightly understood, taught, received, felt and practised, is anti-slavery as it is anti-sin. Just so far and so fast as the true spirit of the gospel obtains in the land, and especially in the lives of the oppressed, will the spirit of slavery sicken and become powerless like the serpent with his head pressed beneath the fresh leaves of the prickly ash of the forest.

There is not a solitary decree of the immaculate God that has been concerned in the ordination of slavery, nor does any possible development of his holy will sanctify it.

He has permitted us to be enslaved according to the invention of wicked men, instigated by the devil, with intention to bring good out of the evil, but He does not, He cannot approve of it. He has no need to approve of it, even on account of the good which He will bring out of it, for He could have brought about that very good in some other way.

God is never straitened; He is never at a loss for means to work. Could He not have made this a great and wealthy nation without making its riches to consist in our blood, bones, and souls? And could He not also have given the gospel to us without making us slaves?

My friends, let us then, in our afflictions, embrace and hold fast the gospel. The gospel is the fulness of God. We have the glorious and total weight of God’s moral character in our side of the scale.

The wonderful purple stream which flowed for the healing of the nations, has a branch for us. Nay, is Christ divided? “The grace of God that bringeth salvation hath appeared to (for) all men, teaching us that denying ungodliness and worldly lust, we should live soberly, righteously, and godly in this present world, looking for that blessed hope and glorious appearing of the great God and our Saviour Jesus Christ, who gave himself for us that he might redeem us from all iniquity, and purify unto himself a peculiar people, zealous of good works.”–Titus ii: 11-14.

But you say you have not the privilege of hearing of this gospel of which I speak. I know it; and this is my great grief. But you shall have it; I will send it to you by my humble prayer; I can do it; I will beg our heavenly Father, and he will preach this gospel to you in his holy providence.

You, dear father and mother cannot have much longer to live in this troublesome and oppressive world; you cannot bear the yoke much longer. And as you approach another world, how desirable it is that you should have the prospect of a different destiny from what you have been called to endure in this world during a long life.

But it is the gospel that sets before you the hope of such a blessed rest as is spoken of in the word of God, Job iii. 17, 19. “There the wicked cease from troubling, and there the weary be at rest; there the prisoners rest together; they hear not the voice of the oppressors. The small and great are there; and the servant is free from his master.”

Father, I know thy eyes are dim with age and weary with weeping, but look, dear father, yet a little while toward that haven. Look unto Jesus, “the author and finisher of thy faith,” for the moment of thy happy deliverance is at hand.

Mother, dear mother, I know, I feel, mother, the pangs of thy bleeding heart, that thou hast endured, during so many years of vexation. Thy agonies are by a genuine son-like sympathy mine; I will, I must, I do share daily in those agonies of thine. But I sincerely hope that with me you bear your agonies to Christ who carries our sorrows.

O come then with me, my beloved family, of weary heart-broken and care-worn ones, to Jesus Christ, “casting all your care upon him, for he careth for you.”–2 Peter v. 7.

With these words of earnest exhortation, joined with fervent prayer to God that He may smooth your rugged way, lighten your burden, and give a happy issue out of all your troubles, I must bid you adieu.

Your son and brother,

For Further Study:
Pennington, James W.C., The Reasonableness of the Abolition of Slavery at the South : A Legitimate Inference from the success of British emancipation : an address, delivered at Hartford, Conn., on the first of August, 1856.
Webber, Christopher L., American to the Backbone: The Life of James W.C. Pennington, the Fugitive Slave Who Became One of the First Black Abolitionists. (New York: Pegasus Books, 2011).