This blog is sponsored by the Historical Center of the Presbyterian Church in America, or more commonly, the PCA Historical Center. Our denomination came out of the old Southern Presbyterian Church, and it seems only right that we should know something of that earlier Church, its character, nature, faults and strengths. One instance of that history of our mother Church is embodied in the life of the man who directed that denomination’s foreign missions in the early part of the twentieth century. Our story today is told by the Rev. C. Darby Fulton, who succeeded Dr. Egbert W. Smith as Executive Secretary of the Foreign Missions Committee. [We have written previously of the Rev. Darby Fulton]. We find an additional interest in this bit of Presbyterian history centered in Greensboro, North Carolina, since that is where the PCA will meet in General Assembly in 2017, keeping in mind that the churches mentioned in this account are not PCA churches. 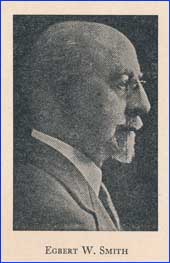 On the evening of August 25, 1944, in Greensboro, North Carolina, the Rev. Egbert W. Smith, beloved Secretary of Foreign Missions, passed serenely to his eternal home. At the age of 82, near his birthplace, among his kindred and lifelong friends, within immediate reach of his chosen burial place, his life work accomplished, this valiant servant of Christ quietly took his leave as though the end of his day had come and he were going home to rest.

Egbert Watson Smith came from a line of old and distinguished families of Virginia. His father, the Rev. Dr. J. Henry Smith, was a Presbyterian minister, born and reared at Lexington. His mother, a daughter of Judge Egbert R. Watson, was born and brought up in Charlottesville. In 1859 his parents moved to Greensboro, North Carolina, where Dr. Smith was born and where his early life and young manhood were spent.

Entering Davidson College at 16, he graduated as valedictorian with Phi Betta Kappa honors in 1882, winning also the Latin and Essayist gold medals. Later, when he was only 32, Davidson conferred upon him the Doctor of Divinity degree.

After a year of teaching in York, South Carolina, young Mr. Smith entered Union Theological Seminary, in Richmond, Virginia, graduating in 1886. Already his unusual gifts as a speaker and his great love for Foreign Missions, two outstanding characteristics of his later life, were in evidence. During his senior year he was unanimously elected by the student body to represent them at the first meeting of the Inter-Seminary Missionary Alliance of the United States and Canada. On his return, his report of the meeting to his fellow students was a factor in the final decision of a gifted young colleague, known later to the whole Church as Samuel N. Lapsley, founder of the Mission in Central Africa.

To study the work at hand, Dr. Smith made numerous visits to the several Mission fields of the PCUS. He crossed the ocean twelve times and touched twenty-four foreign countries in the course of his travels. These journeys carried him through varied experiences. He was feasted by African chiefs; he dined with the sons of the world’s oldest civilizations. He moved with equal freedom among the most civilized of the earth’s people and the most primitive; he traveled by practically every known mode of conveyance; he threaded his way through the crowded streets of the great cities of Japan and China, as well as through the fastnesses of the jungles of Africa and Brazil; he was entertained at Oriental banquets with great pomp and ceremony, as well as in the surroundings of Congo villages to the cadence of native African music.

In 1932, after he had passed his seventieth birthday on January 15 of that year, Dr. Smith declined re-election as Executive Secretary of Foreign Missions, as he had long determined to relinquish the headship of the work when he reached that age. However, the Executive Committee of Foreign Missions immediately elected him Field Secretary, in which capacity he continued to serve with unabated effectiveness to the very day of his death. During the last year of his life he delivered 352 missionary addresses in 62 communities in ten states. No single year in all his long career as Foreign Mission Secretary was more fruitful than his last.

He was distinguished as the author of several books, each of which has reflected his unusual gift and power as a writer. In 1901 he wrote The Creed of Presbyterians, an examination of the Westminster Standards, that eventually went through multiple editions. In 1941, at the request of the publishers, he revised the work and added two chapters. Other of his works included China’s Background and Outlook (1914); Present Day Japan (1920); and The Desire of All Nations (1928). His last work, published posthumously, was titled From One Generation to Another (1945). 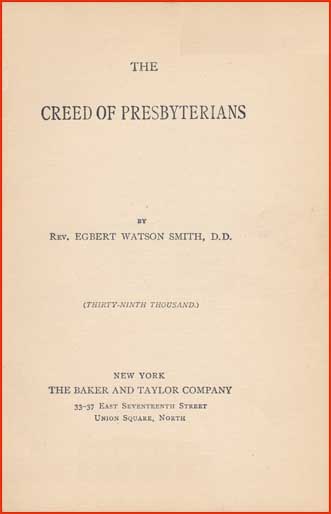 Archival:—
The Egbert W. Smith manuscript collection, which covers the period of 1912-1944, consists of 2,0 cubic feet of archival material, housed in four boxes. The collection was formerly preserved at the old Presbyterian Historical Foundation in Montreat, North Carolina, and with the regrettable closure of that institution, the collection has now been relocated to the Presbyterian Historical Society in Philadelphia.
Abstract:  This Collection consists of diaries, sermons, addresses, writings, correspondence, photographs, and a scrapbook. It includes writings and diary extracts documenting Smith’s trips to mission stations in Korea, Japan, and China, 1918-1919 and 1934, and Africa and the Middle East, 1932; and a scrapbook of clippings about Smith’s work for the Presbyterian Church in the U.S. Executive Committee of Foreign Missions, 1912-1943.