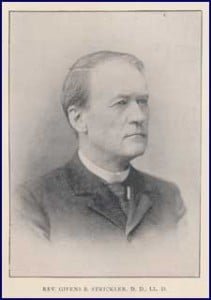 Dr. Strickler was born at Strickler’s Springs, Rockbridge County, Virginia, April 25, 1840. On his father’s side he was of German descent; his great-grandfather being a Lutheran minister. On his mother’s side, (her name was Mary Brown) he belongs to that sturdy, earnest race, the Scots-Irish, who at an early date settled in the Valley of Virginia, and gave that favored land its strong leaning towards Presbyterian doctrine and polity. He was taught in the schools of the County, and at the outbreak of the Civil war was in Washington College in Lexington, Virginia. He entered the Southern Army with the College Company, who called themselves the “Liberty Hall Volunteers,” and this was a part of the 41st Virginia Regiment, and this regiment was a part of the famous “Stonewall Brigade,” receiving this name from its first commander Stonewall Jackson. The brigade was in nearly all the battles in which its famed commander took part, and always behaved with conspicuous courage and gallantry. The young soldier soon became the Captain of his company, by his gallant bearing, and popular manners. Twice was he wounded, but was soon back at his post. In a charge at the battle of Gettysburg, he was captured, and remained a prisoner in the hands of the Federals until the close of the war.

Then he entered Washington and Lee University, where he from the first took a high stand as a student. He graduated from this Institution in 1868, the last year acting also as Tutor in the University. He at once entered Union Theological Seminary, and graduated from this School of the Prophets in 1879, with the highest distinction. He was at once licensed by his Presbytery, and being invited to Tinkling Springs one of the largest and most influential of the country churches in Virginia, he was ordained and installed pastor in the fall of 1870. [In this pastorate he was following the Rev. R.L. Dabney (1847-1852) and preceding the Rev. J.A. Preston (1883-88).]  About the same time he married Miss M.F. Moore, of one of the oldest and most respectable families of the Falling Spring’s church, near the Natural Bridge.

Dr. Strickler remained pastor of  the Tinkling Spring Church for twelve years and a half. His reputation for vigorous and earnest preaching, clear and solid thinking, wise and faithful pastoral work, soon spread far and wide, and many calls from large and influential churches came to him. But he preferred to work at his first charge. Finally in the fall of 1882, the Central Church of Atlanta, Georgia, made such an earnest plea for his services that he yielded, and came to their church in the Spring of 1883.Hardly had he begun the work in their city before he was urgently and unanimously called to the chair of Church History in Union Theological Seminary. After a considerable struggle between his church, who fought his transfer, and the Seminary Committee, Atlanta Presbytery advised him to remain where he was; this he did with all cheerfulness and loyalty. His loving church at once began to build him a new, and a larger church.

This was finished in 1886, and is one of the handsomest and most commodious edifices in our Southern Church. Dr. Strickler’s fine administrative abilities soon manifested themselves, not only in the thorough organizations of his own church in its individual work, but also in the impetus given the work of our Presbyterian Zion all over the city, Presbytery and State. His church at once began to plant missions in different parts of the city, and several of them are now growing working churches. Dr. Strickler’s wisdom and ability were also most conspicuous in the contest against the teaching of Evolution in Columbia Seminary. As leader of the Anti-evolution men he won decided victories in the Synods at Marietta, La Grange and Sparta. Shortly after he was elected to the chair of Theology in Columbia Seminary and to Chancellorship of the University of Georgia both of which he declined.

In 1887 he was chosen moderator of the General Assembly of the Church which convened at Saint Louis. In this responsible and delicate position he acquitted himself most creditably and wisely. At this Assembly he was chosen chairman of the Southern Assembly’s Committee to confer with the Northern Church Committee in regard to organic union. In 1895 the Board of Directors by a unanimous vote elected Dr. Strickler to the important chair of Theology in Union Seminary, and gave him a year in which to decide the question; they at the same time promised to remove the Seminary from Hampden Sidney to Richmond the beautiful and historic capital of the State. During the winter of 1895-96, the devoted flock over which he had presided so long did everything in their power to induce him to decline this call. But a sense of duty to the Church at large impelled him to accept the call, and to ask the Presbytery to allow him to leave his church. It was a sad and solemn meeting which met for this purpose, we all felt that it was the will of the Lord calling His servant to a post for which by nature and training he was eminently fitted. Dr. Strickler preached his farewell sermon to his people on the last Sabbath in July, 1896, and will enter upon his new duties September 2, 1896.

Then in stating the truth as it appears to him, he is always as clear as one of our mountain streams; the simplest can understand him. In the pulpit, he is, besides all this, earnest and effective. In his dealings with his people he was always kind, sympathetic, wise. In the church court he is always patient, considerate of others, but eminently wise and faithful.

His theology is of the most orthodox type. He believes in the inspiration of the Scriptures, in the old fashioned orthodox Calvinistic type of religious thought. He has no crochets, no vagaries, no new ideal as to the cardinal truths of the word of God, and his strong loving character will impress this type of theology on all the students who come from his hand. May his bow long abide in strength. [Among his many honors and accomplishments were the Doctor of Divinity degree, conferred by Washington & Lee University in 1878, the LL.D. degree, awarded by Davidson College in 1894, a term of service as Moderator of the PCUS General Assembly in 1887, and his tenure as joint editor of The Presbyterian Quarterly.]

[Excerpt] : Teaching, by the catechetical method, has marked the history of the church almost from the beginning down to the present time. A divine warrant for it, if not requirement of it, may be found in such passages of God’s word as Deut. vi. 6, 7: “And these words which I command thee this day shall be in thine heart, and thou shalt teach them diligently unto thy children, and shalt talk of them when thou sittest in thine house, and when thou walkest by the way, and when thou liest down, and when thou risest up.” And Exodus xii. 26, 27: “And it shall come to pass that when your children shall say to you, What mean ye by this service?” (the service of the passover) “that ye shall say, It is the sacrifice of the Lord’s passover, who passed over the houses of the children of Israel in Egypt, when he smote the Egyptians, and delivered our houses.” In these instances, in order to give children the full and accurate instruction they needed about the commandments of the Lord referred to, and about the important sacrament instituted in the church in the passover, it was necessary that a number of questions should be asked and answered; and then, that the truth about these and other subjects, once learned, might not be forgotten, but kept ever fresh in the memory, and in constant and influential contact with the mind and heart, it was necessary that it should be frequently reviewed; that there should be “precept upon precept, precept upon precept; line upon line, line upon line; here a little and there a little.” Thus, we may say, the catechetical method of instruction was instituted at the very beginning of the Mosaic dispensation.