“We want the Spirit of God to come as an enlightener and reprover, to show to us as a people our sins and our transgressions. We want that there should be such an acknowledgment of past error, such searching out of present tampering with evil, such putting away of the accursed thing, that as a people we may plead” for God’s promises.”

Our guest author, Dr. David W. Hall, returns today with his latest installment in his Election Day Sermon series. Today’s post focuses on a sermon by the Rev. Thomas Smyth, who is notable for having often been more closely aligned with the Princeton theologians than with most of the other Southern Presbyterian leadership. This series has been an excellent opportunity to study the issue of church and state as it was lived out in the pulpit in the 18th and 19th centuries. With just a few more posts to go, Dr. Hall’s series is timed to end, appropriately, with the election early this coming November. 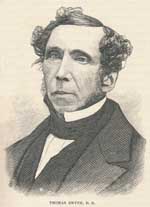 Thomas Smyth (1808-1873) was Pastor of the Second Presbyterian Church in Charleston, SC, during the tumultuous period of the Civil War. He was an author of ten large volumes on a wide array of subjects. This sermon was originally preached on an 1860 Day of Humiliation and Prayer declared by the Governor of South Carolina. A copy of this sermon is in the Library of Congress (click here; it also is included in my 2012 Election Sermons); and it originally appeared in The Complete Works of the Rev. Thomas Smyth (Columbia, SC: R. L. Bryan, 1908), vol. 10.

Choosing Daniel 9: 11, 14 as his text, Smyth began: “God is governor among the nations, King of Kings and Lord of Lords, the high and mighty ruler of the Universe, doing whatsoever it pleaseth him among the armies of heaven, and the inhabitants of the earth—none, with impunity, daring to stay his hand, or say unto him, What doest thou? The most High ruleth in the kingdom of men and giveth it to whomsoever he will.”

Next, he cited the proclamation of the South Carolina Governor as embodying the great truth that rulers should well “bow in reverence” to [God’s] will and set aside days of fasting. Accordingly, a day of Fasting was scheduled; and according to Smyth, “Fasting has been universally adopted by all nations as an expression of consciously-felt sin and sorrow, through which, by the suffering and impoverishment of the body, the mind is led to realize man’s helplessness, dependence and want of all things; and the conscience and heart to come in humble contrition before an offended God, under whose judgments they may be suffering, and whose gracious providence alone can either remove them, or in the midst of judgment remember mercy.   THIS IS ALSO A DAY OF HUMILIATION. This implies calamity, fall and ruin; sin and sorrow; contrition and confession; and the recognition of God, whose righteous indignation has brought all upon us.”

Calling for a day of prayer, also implied that God and “God alone can, help us, and give us true repentance and unfeigned humiliation; that God, alone, can avert all the evils that might come upon us; impart wisdom to our counselors; and give to all our citizens unity of purpose and plans. It implies that God can influence our sister States—who are alike interested—to stand or fall with us; and cause other States to acknowledge his power and presence in this national calamity, and to do justly, and act righteously and peaceably before him. It implies, further, that God can, and that God alone can, incline the hearts of foreign nations to recognize our true posture purposes and plans; and his purposes concerning us; and to fraternize with us.” “It implies,” he said, that only God “can mitigate inevitable disasters and suffering; give us patience and perseverance under all adversities; and secure for us a peaceful, prosperous and happy issue out of all our troubles.”

Next, Smyth lamented the effects of God’s curse on his land. He believed this condition to be a “sad and melancholy fact.” He then extolled the “great, glorious and free” constitution that had sustained the nation, leading her into “ever augmenting greatness, beyond all parallel in the history of the world.” Such constitution, he praised as the “embodiment of wisdom, patriotism, sagacity and prudential foresight and moderation; of sterling good sense; and of religion without restriction upon the full exercise of conscientious differences.” He further believed that this constitution still held great promise. Notwithstanding, Smyth viewed the nation now as a “widow,” a once-great but now lamentable castoff. In contrast to the unparalleled progress, now he called for his church members to “take up the lamentation and say, from this glorious constitutional union all the beauty is departed! This nation hath grievously sinned, therefore is she removed. All that honored her despise her, because they have seen her nakedness. . . . She remembered not her past—her chief and purposed end—therefore she came down wonderfully.”

He blamed neither a particular party, nor sectional pride for the collapse of constitutionalism but pointed to “a conglomeration of . . . atheists, infidels, communists, free-lovers, rationalists, Bible haters, anti-Christian levellers, and anachists.” He also called Christians to repent for having had little “zeal for God [to] seek his glory and the good of man. . . . They pervert the golden rule of our Saviour. That rule was designed not to impart to men the first principles of justice, of right and wrong, but, on the assumption of their existence, to guard us against the perverting and blinding influence of selfishness, pride, passion and prejudice.” Moreover, he accused Christians of not consulting their Bibles on matters of governance; instead they turned to “private interpretations of men; to the developments of philosophy, falsely so called; to the licentious and atheistic spirit of a liberty which knows no restraint and no authority, human or divine.” “They pervert,” he alleged, “the great doctrines of personal responsibility, liberty of conscience, liberty of thought, liberty of opinion and liberty of action.”

In addition to “these perversions of fundamental principles,” Smyth rebuked his peers for being “willingly ignorant of, or practically ignore, the prescience and providence of God; the fore-knowledge and fore-ordination by God, of whatsoever cometh to pass, so that not even a sparrow can fall unheeded to the ground, nor a hair of our heads be unnumbered, nor any; event happen by chance. They forget that government is from God; that the powers that be are ordained of God; and that we are to be subject to every ordinance of man, not only from fear, but for conscience sake. . . .”

He located much of the virus that was infecting the nation in “the evil and bitter root of all our evils . . . in the infidel, atheistic, French Revolution, Red Republican principle.” He further criticized the Declaration of Independence as proclaiming a God who was godless—perhaps a deistic code word to gain support of the colonists. He also jeered pure democratism, favoring submission to the constitution over submission to the will of majorities. He preached: “Another consequence of this seminal principle was the interpretation of the Bible according to the majority—that is, according to the popular opinion, and the coercive enforcement of this majority-interpretation as a higher law upon all who differ from it.” Smyth thought these corruptions were responsible for “anarchy, prodigality, profanity, Sabbath profanation, vice and ungodliness in every monstrous form, and in the end the corruption and overthrow of the Republic, and the erection, upon its ruins, of an absolute and bloody despotism, of which coercion, or in other words, force, is the vital principle.”

While many of us will not agree with all the sentiments of this sermon, his urgent appeal was that it was “not too late, with his blessing, to repent, reform, return unto him, and be governed by his word, will, and providence.” He called on his listeners, even those who disagree, to appreciate the “peculiar providence of God” that has charged us with being the “conservators, of the Bible, the whole Bible, and nothing but the Bible; and of that liberty of conscience, free from the doctrines and commandments of men—which is based upon and sustained by the right and duty of every man to search the Scriptures, to prove all things, and to hold fast that which is good—a liberty of conscience drawing after it liberty of thought, opinion, and conduct, individual responsibility, and individual regality as kings and priests unto God—and a liberty of conscience, which has never existed among men severed from the pure, perfect, and unfettered word of God.”

His call for repentance is worth hearing: “We want the Spirit of God to come as an enlightener and reprover, to show to us as a people our sins and our transgressions. We want that there should be such an acknowledgment of past error, such searching out of present tampering with evil, such putting away of the accursed thing, that as a people we may plead” for God’s promises.”

Following several quotations from Jeremiah, Smyth (finally arriving at his text) called for his members to repent and to call out to God. To accomplish this, his listeners needed “a praying heart. And how shall we get this want supplied? We answer, by PERSONAL humiliation and PERSONAL faith. It is to general humiliation and faith that we are now called. . . . But still it is individuals who make up a congregation and a commonwealth, and it is only by individual confession and humiliation, it can come before God. And does not the example of Daniel, when his people were in captivity in Babylon, show us that it is the holiest men in a nation who most humbly acknowledge and bewail national and general sins. . . .” “Without some such personal sense of sin and humiliation,” he preached, “we cannot fast right, nor can we humble ourselves aright. We cannot draw nigh fervently and with a pure heart, with holiness and confidence . . . But to individual humiliation, we must add individual faith. The one great hindrance to faith—to faith in prayer, and to believing, prayerful humiliation—is guilt upon the conscience.”

His sermon ends with this note of optimism:

Oh, what a blessed day, then, might this become to each one of you if it leads you to search out and discover the reason why you find it so hard to believe, to pray, to expect and confide; if it leads you to see your need of an advocate with the Father, Jesus Christ the righteous; to rely upon his blood which cleanseth from all sin; and thus to find peace in your own soul towards God. Then would you become in deed and in truth, one of your country’s best benefactors and defenders, and . . . you would become one of the “Lord’s remembrancers,” “the worm Jacob” wrestling with God, and prevailing with him to bless us and to do us good, by turning every one of us from our sins to our Saviour, and by sending his invisible and invincible chariot and horsemen, to defend and to deliver us. Then would the voice from heaven cry, and when I ask what shall I cry, the response is, “Cry unto her that her warfare is accomplished, her iniquity pardoned,” and that though a little one she shall become a thousand, and that though one of the least among the tribes of Israel, she shall become great.

And do I not hear a responsive voice from every heart in this congregation and commonwealth, saying, “I will arise and go to my Father?” ARISE AND GO, and thy Father who seeth in secret shall reward thee openly in such untold blessings upon yourself, and upon all the people of South Carolina.