Dr. David Hall is back today with the penultimate (i.e., “next to the last”) entry in his Election Day Sermon series. I’ve enjoyed this series, and hope you have as well. The entire series has presented us with an excellent opportunity to learn firsthand how our forebears handled aspects of the church-state relationship. 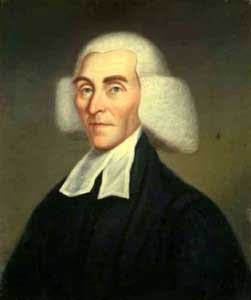 John Adams was certainly influenced by the heritage of Calvinism. In his diary entry for February 22, 1756, Adams wrote: “Suppose a nation in some distant region should take the Bible for their only law-book, and every member should regulate his conduct by the precepts there exhibited! . . . In this commonwealth, no man would impair his health” with vice, but would live together in frugality, industry, “piety, love, and reverence towards Almighty God. . . . What a Utopia; what a Paradise would this be!”1

In 1775, the second President of the United States attended the Old Pine Street Presbyterian Church in Philadelphia. The preacher on that occasion, The Reverend George Duffield (who was later targeted by the British), preached a revolutionary sermon that made quite an impression on John Adams. Adams wrote to his wife on June 11, 1775, that Duffield’s preaching was reminiscent of the fiery expositions he had been accustomed to back in Massachusetts. Duffield applied a Hebrew prophecy2 to America and “gave us as animating an entertainment as I ever heard. He filled and swelled the bosom of every hearer. . . . by this you will see that the clergy this way are but now beginning to engage in politics, and they engage with a fervor that will produce wonderful effects.”3

Adams would later refer to himself as a “church going animal.”4 By any estimation one of the most important figures for the founding of America, Adams, nevertheless, did not identify himself as a Calvinist.5 Toward the end of his life, he championed anti-Trinitarian legislation, and bitterly reviled Calvinists, on occasion, as “snarling, biting” divines. However, the impress of Calvin was so deep on Adams’ predecessors that a certain Genevan fingerprint is indelibly inked on Adams’ writings. Adams believed that knowledge in general could dispel “arbitrary government and every kind of oppression.” In his 1765 Dissertation on the Canon and the Feudal Law, he recognized lust for power or a yearning for dominion as both the cause of much oppression and the effect of human depravity.

Rights, which Adams saw as general but not purely secular, were derived from the “great Legislator of the universe.” Human rights were squelched when human rulers wrested from the people the inalienable grants given by this great Legislator. Liberty was also derived from humanity’s Maker, and the right to knowledge came from the great Creator, certainly not from a secular basis.

On December 11, 1783, Congress had appointed a day of thanksgiving “for the restoration of Peace and establishment of our Independence, in the Enjoyment of our Rights and Privileges.” In a service for that occasion at the Third Presbyterian Church in Philadelphia, George Duffield (who was a Chaplain of Congress as well as pastor of the church) resorted to an OT passage to make this point about God’s providence extended to America: “Nor was military prowess only given. He that put of the Spirit of Moses on the elders of Israel [cf. Ex. 18], raised up Senators and guided them in council to conduct the affairs of his chosen American tribes.” Clearly, the biblical basis for republicanism and the institution of a “senate” was the same for Duffield as it had been for Calvin and Beza two centuries earlier.

Duffield (1732-1790), a 1752 Princeton graduate, served a lengthy pastorate at the Pine Street Presbyterian Church—even during the war, when at one time the British put a price on his head—and he was consistently popular with members of the Continental Congress.

A New Light Presbyterian, he chose Isaiah 66.8 as the text for this sermon. In answer to Isaiah’s question—“Shall a nation be born in a day?”—he affirmed: “The earth has indeed brought forth, as in a day. A nation has indeed been born, as at once. It has not been Israel’s forty years of tedious wilderness journey; nor Rome’s, or the United Belgic provinces, long continued scene of arduous, dubious struggle: But almost as soon as our American Zion began to travail; and without experiencing the pangs and pains which apprehensive fear expected; she brought forth her children, more numerous than the tribes of Jacob, to possess the land, from the north to the south, and from the east to the yet unexplored, far distant west: That with great propriety, may we hail every friend of liberty, on this auspicious day, in the language nearly following our text; rejoice ye, with America, and be glad with her, all ye that love her, rejoice for joy with her, all ye that mourned for her.”

He castigated the “venal Parliament” of England for her design to crush the American efforts. Moreover, comparing the Crown to Pharaoh, he preached:

Pharaoh, indeed, might have reason to fear, because Israel were an entirely different people; and in their religion and manners separated far from the people of the land. But in the present case, though the court of Britain appear carefully to have copied the Egyptian model; and their measures have produced a similar event; yet, as the people of these states were the same as the people of Britain, their religion and manners the same; and no disposition to separate from them had ever appeared: But an attachment, even to enthusiastic fondness, had always obtained; it must have required an exorbitant share of infatuation to have raised a suspicion so high, as to produce the spirit and zeal that directed the British cabinet. To raise a revenue, and bring America to bear her proportion of the national debt has been assigned as the motive. America, by centring her trade in Britain, contributed her liberal share, nor had she ever withheld her blood or her treasure when requisitions were made; that even malevolence itself had been nonplussed from thence to derive a plea, unless through a mad desire to take by compulsion, what would otherwise be cheerfully given. It seems therefore most probable, his Britannic majesty wished to increase the power of the crown, so as to wrest the very shadow of liberty out of the hands of all his subjects, and reign an absolute monarch; and for this end began where he hoped, by bribes and craft, to cloak his design under the cover of parliamentary sanction.

Both liberty and charity were threatened by this monarchical oppression, preached Duffield. Whatever the motive, he thought, “America was marked out, for servile submission, or severe subjugation: and the power of Britain employed to accomplish the end.” Duffield commended America for choosing “liberty as her prize,” and attempting to battle the greatest military power of the day. His pulpit oratory is still impressive, to wit:

Already had Britain planted her baleful banner on our coast; and her proud insulting flag had possessed our harbours. Her oppressive edicts had gone forth; and her naval and military strength were combined to enforce obedience. As the careful mariner watches the heavy gathering cloud, and dreads the approaching storm; America, with anxiety beheld, and waited the event. Prudence would have seemed to dictate an early resistance to manifest hostile designs; nor suffer an avowed enemy to every privilege to entrench in quiet, and strengthen themselves in a capital town. Nor was America blind to the measure: but that God, who so early espoused her cause, that her innocence in the case, and her reluctance to arms, might be evident to all, withheld her from the deed; and left Britain, on Lexington’s ever-memorable day, to open the scene of war. Quick as the flash of lightning glares from pole to pole, so sudden did a military spirit pervade these then united colonies; but now, blessed be God, confederated, established states. The peaceful husbandman forsook his farm; the merchant relinquished his trade; the learned in the law dismissed their clients; the compassionate physician forgot his daily round; the mariner laid aside his compass and quadrant; the mechanic resigned his implements of employment; the sons of science ceased their philosophic pursuits; and even the miser half neglected, for a time, his gold and his gain, and the griping landlord his rents. All prepared for war, and eagerly flew to the field.

He that put “the spirit of Moses on the elders of Israel, raised up senators, and guided them in council, to conduct the affairs of his chosen American tribes.” Duffield further extolled, “America’s day, the morning of which had lowred with heavy clouds, began to brighten a pace; and its hurrying hours hastened their way to a noon tide glow. The justice of her cause; the influence of her great ally; and the insults and injuries experienced by other nations, from British arrogance, procured her still farther support; and narrowed the distance to the object of her wish. Britain saw, with indignation: And in firm alliance with every infernal power . . . she resolved on utmost vengeance.” He predicted: “generations yet unborn will look back with wonder; and venerate the memories, and long perpetuate the names of those who guided the helm through the storm.”

He mentions that He “who raised up Cyrus, to break the Assyrian force, and say, ‘let Israel be free,’ endued the monarch of France with an angel’s mind, to assert and secure the freedom of his United American States. And, by him were the hearts of other nations disposed to our aid.” Finally, he concludes with this exhortation: “It is, that we love the Lord our God, to walk in his ways, and keep his commandments, to observe his statutes and his judgments. That a sacred regard be maintained to righteousness and truth. That we do justice, love mercy, and walk humbly with our God. Then shall God delight to dwell amongst us. And these United States shall long remain, a great, a glorious, and an happy people. Which may God, of his infinite mercy, grant. Amen.”

This sermon is available in Ellis Sandoz, Political Sermons of the American Founding Era (Indianapolis: Liberty Fund, 1998) and on the web at: http://consource.org/document/a-sermon-preached-on-a-day-of-thanksgiving-by-george-duffield-1783-12-11/.
See also: https://thisday.pcahistory.org/2015/12/december-11-rev-george-duffield/.

5 Adams, apparently was headed toward the congregationalist ministry at one time. His later reflections explain that “an uncharitable spirit of intolerance” kept him from divinity, and made him more fit “for the bar than the pulpit.” Selected Writings, 151. Yet, by the end of his life he expressed to Jefferson (1817) that he did not believe in total depravity: “I believe there is no individual totally depraved. The most abandoned scoundrel that ever existed, never yet wholly extinguished his conscience, and while conscience remains, there is some religion.” Cited in John Witte, Jr., “‘A Most Mild and Equitable Establishment of Religion’: John Adams and the Massachusetts Experiment,” Journal of Church and State, vol. 41 (Spring 1999), no 2, 236. Adams clearly rejected Calvin’s ideas of depravity, election, and the trinity. See Jonathan C. D. Clark, The Language of Liberty, 1660-1832 (Cambridge: Cambridge University Press, 1994), 370.