December 19: Machen’s tribute to his father

It was on this day, December 19th, 1915, that Arthur W. Machen, father of Dr. J. Gresham Machen, died, at the age of 88. Arthur W. Machen was a noted Baltimore lawyer and served as a ruling elder in the Franklin Street Presbyterian Church of Baltimore. The following testimony to the life of his father is found in the work Christianity in Conflict, a work which appeared in the volume Contemporary American Theology, edited by Vergilius Ferm (New York: Round Table Press, 1932-1933. 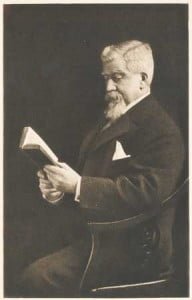 My father was a lawyer, whose practice had been one of the best in the State of Maryland. But the success which he attained at the bar did not serve in the slightest to make him narrow in his interests. All his life he was a tremendous reader, and reading to him was never a task.

I suppose it never occurred to him to read merely from a sense of duty; he read because he loved to read. He would probably have been greatly amused if anyone had called him a “scholar”; yet his knowledge of Latin and Greek and English and French literature (to say nothing of Italian, which he took up for the fun of it when he was well over eighty and was thus in a period of life which in other men might be regarded as old age) would put our professional scholars to shame.

With his knowledge of literature there went a keen appreciation of beauty in other fields—an appreciation which both my brothers have inherited. One of my father’s most marked characteristics was his desire to have contact with the very best. The second-best always left him dissatisfied; and so the editions of the English classics, for example, that found place in his library were always carefully chosen. As I think of them, I am filled with renewed dismay by the provision of the Vestal Copyright Bill, nearly made a law in the last Congress, which would erect a Chinese wall of exclusion around our many things that are finest and most beautiful in the art of the printing and binding of books. 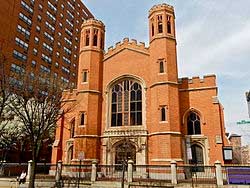 He was a profoundly Christian man, who had read widely and meditated earnestly upon the really great things of our holy Faith. His Christian experience was not of the emotional or pietistical type, but was a quiet stream whose waters ran deep. He did not adopt that “Touch not, taste not, handle not” attitude toward the good things or the wonders of God’s world which too often today causes earnest Christian people to consecrate to God only an impoverished man, but in his case true learning and true piety went hand in hand. Every Sunday morning and Sunday night, and on Wednesday night, he was in his place in Church, and a similar faithfulness characterized all his service as an elder in the Presbyterian Church. At that time the Protestant churches had not yet become political lobbies, and Presbyterian elders were chosen not because they were “outstanding men [or women]* in the community,” but because they were men of God. I love to think of that old Presbyterian session in the Franklin Street Presbyterian Church of Baltimore. [pictured, above right]

It is a refreshing memory in these days of ruthless and heartless machinery in the Church. God grant that the memory may some day become actuality again and that the old Christian virtues may be revived!

[* TDPH Editor: Dr. Machen wrote this article in the early 1930’s, when the effort to permit women to serve as ruling elders was gaining ground in the Presbyterian Church in the U.S.A. His bracketed comment should be understood in that light.]

Words to Live By:
Honor thy father and thy mother, that thy days may be long upon the land which the Lord thy God giveth thee.” – Exodus 20:12.

Children, obey your parents in the Lord, for this is right. Honor your father and mother (which is the first commandment with a promise), so that it may be well with you, and that you may live long on the earth. – Ephesians 6:1-3.

Also on this day:
December 19, 1794 – Ordination of the Rev. Daniel Dana, then installed as pastor of the historic First Presbyterian church of Newburyport, Massachusetts.