Many 19th-century Presbyterians opposed the practice of slavery. Reformed Presbyterians, while comparatively small in number as a denomination, were notable for being uniformly and resolutely opposed to it.

The Reformed Presbyterian Argument Against Slavery

Bring up the name of Henry Van Dyke and some might remember the “moderate liberal” who left the First Presbyterian Church of Princeton, New Jersey rather than sit under the preaching of J. Gresham Machen. Some might also know this same Henry Van Dyke as a noted author in the late 19th and early 20th centuries, an author whose books were also beautifully bound works of art. 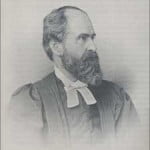 But that was the son, Henry Jackson Van Dyke, Jr. [1852-1933]. Today we start by looking at Henry’s father, Henry Jackson Van Dyke, Sr. [1822-1891, pictured at right]. He was an otherwise orthodox man who served for many years as pastor of the Presbyterian church in Brooklyn, New York. While the son was a prolific author, the father’s published works were primarily sermons and addresses.

Regrettably, Rev. Van Dyke is remembered today, if he is remembered at all, for an infamous sermon in which he attempted to defend the practice of slavery. That sermon was delivered on December 9, 1860, and it was titled “The Character and Influence of Abolitionism.” Perhaps it was the shock of a Northern pastor saying such things, but the sermon gained instant notoriety. Van Dyke’s sermon reduces to four main points:

1. Abolitionism has no foundation in the Scriptures.
2. Its principles have been promulgated by misrepresentation and abuse.
3. It leads, in multitudes of cases, and by a logical process, to utter infidelity.
4. It is the chief cause of the strife that agitates and the danger that threatens our country.” 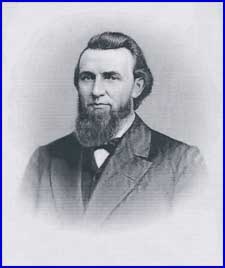 So much for Rev. Van Dyke’s sermon. It serves to introduce you today to the review and rebuttal delivered just a few weeks later, on this day, December 23d, in 1860, by the Rev. J.R.W. Sloane, D.D., [pictured here on the left], who was at that time pastor of the Third Reformed Presbyterian church of New York City. Rev. Sloane later served as professor of theology in the Reformed Presbyterian seminary at Allegheny City, Pennsylvania, from 1868-1886.

The full discourse by Rev. Sloane is too long to reproduce here. But to focus on just the first portion of his review, here is the heart of his reply to Van Dykes first contention, edited for length. He begins:

1. There is no word in the Hebrew language for slave, none for slavery. There is a word for servant, and one for servitude, but no word like our word slavery, denoting a condition of involuntary servitude; no specific term that expresses that form of relation between man and man. Had slavery been a divine institution, as Mr. Van Dyke argues, surely there would have been a word to express the idea specifically. The fact that there is no such word is a strong presumption that there was no such thing.

2. There is no account in the Old Testament of any permission for the sale by one person to another, of a third who was allowed no voice nor will in the transaction; no such transaction is recorded; on the contrary, all such traffic in human flesh, in “slaves and souls of men,” was absolutely prohibited; it never was attempted except in direct violation of the law, and never failed to bring down upon the people the withering curse of Heaven. There was no purchase of men, except from themselves, by voluntary contract for a specified sum, for a definite time, known and agreed upon by the parties; there were no slave-hunts in other countries for a supply of servants; there was not a single barracoon on the borders; there were no slave-pens in the cities –no auction blocks, upon which men, women, and children might be placed and sold to the highest bidder in all the land. You might have passed through all the tribes from Dan to Beersheba, without ever meeting a coffle of slaves!

3. The special statute designed to prevent this crime, “He that stealeth a man and selleth him, or if he be found in his hand, he shall surely be put to death,” (Exod. 21:16) forever brands with the stamp of God’s reprobation and curse American slavery, and rendered the practice of such an iniquity in the Jewish Commonwealtth impossible.

4. The law for the fugitive rendered involuntary servitude in the Hebrew Commonwealth impossible–“Thou shalt not deliver unto his master the servant which is escaped from his master unto thee; he shall dwell with thee, even among you, in that place which he shall choose in one of thy gates, where it liketh him best; thou shalt not oppress him.” (Deut. 23:15)

5. The law of Jubilee rendered slavery impossible among the chosen people. “And ye shall hallow the fiftieth year, and proclaim liberty throughout all the land unto all the inhabitants thereof.” No limitation, no restriction; the Jubilee was glorious, because it was a proclamation of liberty to all without distinction; but if it had no reference to the foreign-born servant, it would have been a farce, a mockery, for all Hebrew servants went out at any rate by the law of their service. Mr. Van Dyke affirms that there was no jubilee for the heathen servant, nor for the Hebrew whose ear was bored. The idea, as it relates to the latter, is too absurd to be tolerated for a moment. Is it to be supposed that any man who possessed common sense would, merely because he loved his master, consign himself, wife, children, and children’s children, to the latest generation, to a hopeless bondage?–or, that God would have enacted a law which would have permitted such injustice to arise from such folly? The truth is, that the term forever, in this connection, is idiomatic, and means only to the year of jubilee. The very nature of the regulations as to land and property make this certain. The argument is fully elaborated in the larger works upon this subject. If any thing can be made clear, this has been, that the jubilee was a proclamation throughout all the land to all the inhabitants thereof; and that the first notes which pealed form every hill-top of Judea, on the first morning of this auspicious year, proclaimed to all servants the termination of their servitude. What a moral obliquity does it argue to find a man desirous to construe every passage in which there is room for a doubt, in favor of this atrocity! I do not wonder that a distinguished man said of such characters, that their god was hisdevil.

7. I do assert, notwithstanding Mr. Van Dyke’s disclaimer, that the argument for polygamy, the twin sister of slavery, is stronger than for slavery. I can assure him that the day is not far distant when his arguments for oppression will be as abhorrent to all right-thinking men, as those of Brigham Young for the accursed system which he has established in Utah. Polygamy was tolerated, slavery was not.

8. Were we to grant all that these men claim for the system which prevailed in the Jewish Commonwealth, they would be as far from having found any justification of American slavery as ever. They must needs show the same divine warrant as they suppose the Jews to have possessed. They must take all the laws and regulations with it; for in cases of divine authority it will not do to select; all must go together. But how long would American slavery last under those laws?

They would pierce it through and through in a thousand directions. Their enactment would be equivalent to immediate emancipation. American slavery could not live a day under single enactments relating to Hebrew servitude. Give the American slave about three-sevenths or one-half of his time, as was given to the servants among God’s people, and how much would slave property be worth in the South?

But what sort of slavery is it for which Mr. Van Dyke pleads? He can not in accordance with his Presbyterian principles (belief in the unity of the race, descent from Adam, and representation through him,) put it on the ground of diversity of color and inferiority of race. Either of these positions would overthrow his entire system of belief–he knows that God hath made of one blood all nations of men. The logical consequence of his plea then is for the enslaving of the white, as much as the black; but would he dare to say this? What is the ground of right on which he plants himself? This he has not told us. [We?] would be curious to hear an explanation of this point.

Some thirty pages later Rev. Sloane concludes his review with these words, wise words for any time:

This is my answer to the charges, arguments, statements, and perversions of this remarkable discourse, a discourse which marks the lowest point that the northern pulpit has ever reached. Yet I rejoice that it has been preached. It will open blind eyes, and carry its own refutation where my words can never reach. Moreover, I am relieved at the thought that we have touched bottom–there is surely no lower deep.

But, I am asked, what is my remedy for present evils? . . . My remedy is, to stand firm, refuse all compromise, do our whole duty, think, speak, act, just as at other times, and leave the men who make the trouble to furnish the remedy; timidity, not firmness, has been the curse of every great and good cause in which it has been permitted to enter.

Be patient, forbearing, forgiving, kind, this is Christ-like, is divine; seek the best interests–the highest good–of all; but do not swerve a hair’s breadth from the path of duty, for the sake of averting evils which, like the stone of Sisyphus, must evermore return to plague and molest us. . .  This is the hour in which God and Liberty expect every man to do his duty, assured that, as always under the Divine guidance and protection, the path of duty will be found to be the path of safety. Amen.

The character and influence of abolitionism. A sermon preached in the First Presbyterian Church, Brooklyn, on Sabbath evening, Dec. 9th, 1860. by Henry Jackson Van Dyke [1822-1891].