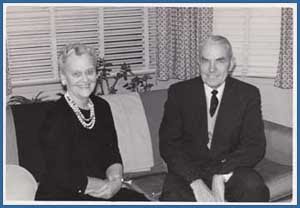 Image : Photograph of Lardner and Grace Moore in Takamotsu, Japan, in 1963.