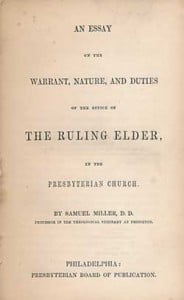 [Above right: Title page of Miller’s work on the ruling elder, as it appeared in the 1832 reprint.]