Early colonial Presbyterians in the years before the American Revolution knew all about Cumberland County in Pennsylvania. This county, at one time, extending all the way to Pittsburgh, Pennsylvania, and was the objective for the tens of thousands of Scotch-Irish Presbyterians coming across the ocean from Scotland directly, or through Ulster, Ireland and then onto the shores of the new continent. Countless of them after a time in Cumberland County continued to travel west while others of them turned south to what would become the Southern states. But there were those who stayed right in the rich farmlands of Central Pennsylvania, and specifically in and around Carlisle, Pennsylvania.

Those who were Presbyterians in doctrine and life in Cumberland County set their attention to continue the faith of their Presbyterian fathers. It was said that as they settled down in the area, the trinity of home, school, and the church was set up in orders of importance.

In the home, the husband and father of usually large families, like eight to twelve children, had the responsibility to rear his family in the things of the Lord. That included a home religion centered around the Bible, which was usually the Geneva Version. Daily family “altars” were set up in the confines of the home, with the father being the spiritual leader. If the Presbyterian pastor found this practice being neglected, he would appoint a near-by more spiritual husband and father to take over this religious practice in their home! It was that important to the spiritual health of the family.

Usually there would be a shelf in the family home which had the Bible on it, the Westminster Confession of Faith and Catechisms,The Psalter for Singing, Pilgrims Progress, Thomas Boston’s “The Four-fold State”, and the “Saints Everlasting Rest” – all for spiritual reading and study by the members of the home.

The School, whether in a home school setting or a nearby one-room school, would enforce these guides for instruction, including even the Bible and the Westminster Standards as part of their curriculum.

The Church was the public expression of religious life as well. So in Carlisle, at first, the Meeting House at the springs, along with a graveyard, was established in 1741, which place continued to 1758. Then in 1758, the congregation moved to the city square at Carlisle, Pennsylvania to build their sanctuary. While it wasn’t until 1772 that the building was finally finished, it resides there yet today.

Our focus today centers on this day, January 12, 1833, when Second Presbyterian Church in Carlisle was established with a petition to the Carlisle Presbytery to begin a separate church. Such a petition was granted by the Presbytery immediately. The records state that this was an outreach of First Presbyterian in that the increasing numbers in attendance could be siphoned off to a second church. However the building was also very close to the New School – Old School Division in the ranks of Presbyterianism which took place nationally between 1837 and 1870. If it was simply a case of increased growth, then it is strange that Second Church simply moved one block south of the present First Presbyterian congregation – hardly far enough without giving the appearance of a competing congregation. 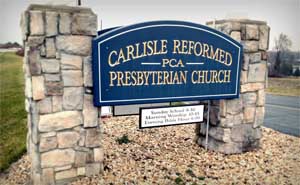 Words to Live By:
The books which made up the Presbyterian and Reformed faith which were found in every Presbyterian home of the 18th century are still available today. Contact your local Reformed bookstore for them.