Founding Was In His Blood. 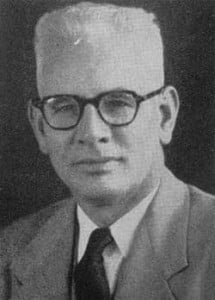 Wick Broomall, Jr. was born on this day, January 31, 1902 to parents Wick Broomall, Sr. and his wife, Annie Nixon Broomall. Their son was educated at Maryville College, graduating in 1925 and then preparing for the ministry by attending Princeton Theological Seminary, from 1925-1929. Loraine Boettner was attending Princeton at that same time. Wick earned the Th.B. degree in 1928 while concurrently earning an M.A. from Princeton University, and he then earned the Th.M. degree in 1929. That was the year that was marked by the reorganization of Princeton Seminary, a change in the governance of the school which allowed modernists to take control and a change which drove conservatives like Robert Dick Wilson, J. Gresham Machen, O.T. Allis, and several other professors to resign in order to start Westminster Theological Seminary.

By August of 1929, Wick was ordained by Birmingham Presbytery and he briefly served as stated supply for the PCUS church in Montevallo, Alabama, 1929-30, before taking a post teaching at the Evangelical Theological College, 1930-32 (this school was renamed Dallas Theological Seminary in 1936). Returning to Birmingham, he pastored the Handley Memorial church, 1933-37 while also serving as the founding President Birmingham School of the Bible (now Southeastern Bible College). 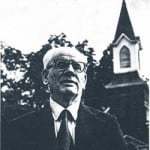 Rev. Broomall also served churches in Georgia and South Carolina and taught at Columbia Bible College, 1938-51, before transferring his credentials into the Associate Reformed Presbyterian Church and taught at Erskine Theological Seminary, 1952-58, then was received back into the PCUS and pastored the Westminster Presbyterian church in Augusta, Georgia, 1958-69. While serving as one of the founding faculty at the Atlanta School of Biblical Studies, 1971-75, he was also pastor of the PCUS church in Sparta, Georgia, 1972-75, and as one of the founding fathers of the PCA, led the Sparta church in becoming one of the founding churches of the new denomination.

The author of a number of books and articles, Rev. Broomall was also a founding member of the Evangelical Theological Society, well-known among their number. On February 5, 1976, he was called home to his Lord, at the age of 74.

Words to Live By:
In 1938, an article by Rev. Broomall, on the subject of regeneration, appeared in The Evangelical Student. This would have been published just as he began his tenure at the Columbia Bible College, and may be among his first published works.

“Much is being said and written in our modern age about the fruits of Christianity. The so-called social gospel of bankrupt Modernism is nothing less than a vain attempt to get the fruits of Christianity without the one essential root that alone can produce the desired fruits. The root that we are referring to is what the Bible calls the new birth or regeneration. The sterility and barrenness of present-day Modernism is to be found in the fact that Modernists have largely denied that man as he is needs a radical change in his nature. They have said so many nice things about our sinful Adamic nature, and have dressed it up with so many refinements and cultural embellishments, that they have completely covered up the facct that man’s nature is essentially evil and is absolutely incapable of producing the desired fruits. One does not need to hear or read many sermons in order to be convinced that the doctrine of regeneration as taught in the Word of God is both denied and ignored today.”