Train up a child in the way he should go: and when he is old, he will not depart from it.—Proverbs 22:6. 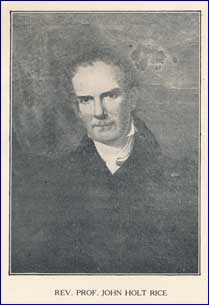 John Holt Rice, the second son of Benjamin and Catherine Rice, was born near the small town of New London, in the county of Bedford, on the 28th of November, A.D. 1777. From the first dawn of intellect, he discovered an uncommon capacity for learning, and a still more uncommon disposition to piety. We have seen some reason to believe that like Samuel, he was called in the very morning of his life; at so early an hour indeed that he could not distinguish the voice of God from that of his own mother—so soft and so tender was its tone. It was, in truth, the first care of this excellent woman to train up her infant child in the nurture and admonition of the Lord; and you might have seen the weak and sickly boy always at her knee, reading his Bible or Watt’s Psalms, to her listening ear, and catching the first lessons of religion from her gentle tongue. No wonder that he ever retained a most grateful sense of her special service in this respect, and warmly cherished her sacred memory in his filial heart.

Words to Live By:
Parents, do not think that you have to wait until your children are older before you can discuss spiritual matters with them. Lead them to Christ while they are still young. Teach them the basics of the Christian faith. Lead them in memorizing key Scripture verses, and so equip them for life. Catechize them, using the Westminster Shorter Catechism. Daily come together with them before the throne of grace and teach them to pray and how to watch for the Lord’s answers to those prayers.

For more on this important subject, see the fifth chapter (pp. 175ff.) in the little volume, Children of the Covenant, by Rev. T.D. Witherspoon.