Another of the many tracts found as a collection among the papers of PCA pastor “Bud” Moginot was one titled “The Crime of the ‘Auburn Affirmation’ (A Sermon)”. This tract was authored by the Rev. Ira Miller, and is dated 4 February 1942. Miller had been a minister in the Presbyterian Church,U.S.A., from around 1906 until 1942, at which point he was entered on their rolls as honorably retired. He attended the Fifth General Synod of the Bible Presbyterian Church in 1942 and in November of that year, transferred his credentials to the BPC. He was active in the BPC Presbytery of the Midwest, and served as the moderator of Session when the First Bible Presbyterian Church of St. Louis was without a pastor, up until that church called the Rev. Francis A. Schaeffer. Rev. Miller even participated in Schaeffer’s installation as pastor, with Miller giving the Charge to the Congregation. By 1948 he was no longer on the roll of Presbytery and we think he may have moved to California.

THE CRIME OF THE
“AUBURN AFFIRMATION”
(A SERMON)

“But if any provideth not for his own, and
specially for his own household, he hath
denied the faith, and is worse than an unbeliever.”
(I Tim. 5:8, R.V.)

Let no one suppose that I am ignorant, or seeking to take advantage of your ignorance, in denying that Paul is here speaking of provision for the PHYSICAL and TEMPORAL needs, especially of a man’s parents, widow and children. He is exposing to well-deserved contempt the conduct of a man who would be indifferent to these while at the same time pretending to be devoted to the service of God. His faith, says Paul, is worse than NO faith ; his service worse than NO service ; his state worse than an unbeliever’s state. The condemnation is severe.

But let us suppose this same man, or the men of an entire Christian congregation, or the minister of that congregation, or the entire denomination to which that congregation belongs, is equally indifferent to proper provision for SOULS under their care? Is that not a greater fault? Consider that the soul, unlike the body, is not for a fleeting day, and then dissolves into dust. No, it is for ETERNITY, and must live eternally, or die eternally. Then consider that God has constituted each father a shepherd and provider for the souls of his household, each congregation for its people, each pastor for his flock. If they neglect this duty, would not the guilt be greater, seeing that eternal, and NOT temporal loss, would be the certain consequence? Then should not the condemnation be more severe even than this of Paul here? 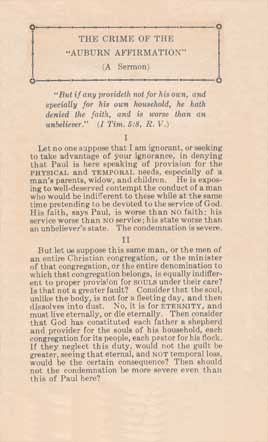 For what were the teachings of the Bible in respect to which these men demanded liberty to teach that “THE BIBLE IS NOT INERRANT?” Were they troubled, as is common among blasphemers of the ignorant sort, because the Bible does not explain where Cain got his wife? Were they shocked, as Bob Ingersoll claimed to be, at being asked to believe that good men go to hell for not believing “that rib story” of the creation of woman? Did they wish to be permitted to smile at the ludicrousness while, as intelligent men, they, of course, deny the historicity, of Balaam’s ass speaking? Did their astronomy contradict the fantastic tale in Joshua of the sun and moon standing still? Were they unwilling to be sponsors of the world’s greatest “fish story” of a whale swallowing Jonah without Jonah dying? Or did they think, as I once heard a certain minister explain, that, although the Book of Daniel is unhistoric, and its miracles fabricated, yet in the days of Antiochus,—and no doubt often since—true religion, and many souls, were saved through believing them? Not these speaks on the marble, but THE ETERNAL FOUNDATIONS UNDER THE WHOLE STRUCTURE OF GOD’S SAVING TRUTH were the matters concerning which they wished to be permitted to believe that “THE BIBLE IS NOT INERRANT.” This the remaining five points of their infamous “AFFIRMATION” prove.

That God actually became incarnate, taking upon Himself human nature through the miraculous power of the Holy Spirit in the womb of the Virgin Mary ; that Jesus actually performed many miracles, which were signs of His Deity and proofs of His saving power ; that God actually laid my sins on Jesus, who bore the penalty for them on the Cross, thus satisfying completely the righteous demands of a just and holy God ; that the same body in which He suffered actually lived again on the third day, a proof that the sacrifice has been accepted, and both my body and my soul redeemed ; that He will actually and personally return to earth some day, to raise, glorify, and reward His saints, to judge the world, and to usher in His Kingdom which men have failed to build ; there are the teachings of the Bible concerning which these men demand the rights to differ, and to assert, if they wish, “THE BIBLE IS NOT INERRANT.” To these teachings the official testimony of the Church has been completely silenced. Those who still insist upon proclaiming them are forced to do so on the outside.

Now consider the enormity of the CRIME of these men, and especially against the two-millions of souls who comprise the present membership of a great historic Church. Consider that they have taken away, not the SHELL of the NUT of God’s grace, but it’s KERNEL ; not the CRUMBS which fall from the table, but the children’s very BREAD. For they have thrown doubt upon EVERY ONE of the mighty acts of God for man’s redemption. And the testimony of this entire Holy Book, of every truly Christian sermon and hymn, of every saint of God who has gone shouting home to glory, has been that we are saved, not by what WE have done, but BY BELIEVING IN what GOD has done for my poor soul. But now come these BLIND LEADERS OF THE BLIND, these wolves in sheep’s clothing, and they say, “Forget all that.” It is not at all certain that Christ was born of a virgin, that His blood cleanses from sin, that His body lived again the third day, or that He is coming back to earth again. Besides, to believe all this is not necessary. It is better to say, ‘I am against war,’ ‘I am for social justice,’ ‘I believe in the brotherhood of man,’ ‘I choose the Jesus way of life.’—than to say, ‘I BELIEVE THAT JESUS DIED FOR ME.’ ” Do these men know that the Cross on which Jesus died for sinners is all that stands between your soul and Hell? It seems not. But I know it ; and I now solemnly declare to such of you as have been repeating their vain shibboleths exalting human works, that unless YOU REPENT and look to the Cross and believe in it as your only hope, YOU WILL GO TO HELL! I hope you understand me.

Now, I said, “Repent.” But these men too say, “Repent.” Yes, now that they have led us into the world’s greatest horror, now that our feet are sunken deep into the mire in the horrible pit of hopelessness, they cry, “You men had better pull yourselves out of the mire—by your bootstraps!” For they have taken away the motive for repentance—the wonderful love of God in Christ. They have robbed us of the power for repentance—the blessed renewing of the Holy Spirit in the new birth. They have denied us the only hope of deliverance in repentance—the coming of the Lord. So they have failed to provide for the deep and dire needs of the souls of those in their own households. They are like a householder who, having starved slaves and children all winter, at the coming of spring thrusts them forth into his fields, saying, “Now go work! Repent!” “The bread of God,” Jesus said, “is he who cometh down from heaven, and giveth life unto the world.” This bread they have failed to provide. They did not provide for their own. They have denied the faith. They are “Unbelievers—and worse!”

But I too, shall say, “Repent.” I shall do more, I shall tell you where to begin. Repent first of all of listening to a hireling who is not the shepherd. Repent of following the deceiver and follow the true. “The Presbyterian Church in the United States of America” is now in control of unbelievers. I know this, and therefore have no choice but to leave it and to seek other fellowship. I advise all truly Bible-believing ministers and congregations to do the same. I reason thus : “Should the darkness control the light? Should unbelievers govern believers? Should the people of God be taught by the ministers of unrighteousness? And what repentance, what penitence, what remorse, can avail those who insist upon following blind guides? Shall they not surely fall into the ditch?

I believe that God is now punishing our Church for the manner in which we have mistreated His true servants in the past. But God has promised to send His people a true shepherd if they ask Him. So repent—I do not know that it is too late,—although it may be. But I do know this : The Church of God must shake herself free from Modernism and Modernists—or perish. And may God save our souls from the infidelity and tyranny of shepherds who are UNBELIEVERS AND WORSE.