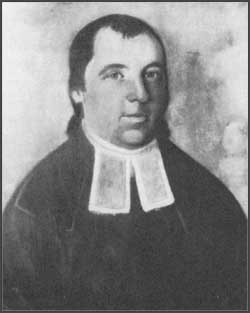 James Muir was a son of the Rev. Dr. George and Tibbie (Wardlaw) Muir, and he was born on the 12th of April, 1757, in Cumnock, Scotland. Both his father and grandfather were highly respected ministers in the Church of Scotland, and the town of Cumnock was where his father served as pastor.

Little is known now of his early years. He studied at the University of Glasgow, and then studied theology at Edinburgh, completing his preparation in London. James was there licensed to preach by six clergymen who called themselves “dissenting ministers in the city of London” and who were loyal to the Church of Scotland. James then worked as a teacher in London until, in 1781, this same Presbytery ordained him and he answered a call to serve a congregation of Scotch Presbyterians on the island of Bermuda.

Rev. Muir’s story becomes rather complicated to tell from that point on until his death in Alexandria, Virginia, August 8th, 1820. The details are more than can be easily related in our small space here. It has been noted that Rev. Muir and his wife are two of  the very few buried inside the city limits of Alexandria, despite an 1809 restriction on cemeteries there.

When the Rev. William Buell Sprague was gathering biographies of various pastors, the Rev. Elisha Harrison replied to his request with a good account of Rev. Muir’s life. In part, he related that

“Dr. Muir was a severe student. He could not tolerate the idea of addressing immortal souls on the most momentous of all concerns, without having prepared himself for it by careful study as well as earnest prayer; and few things would put down a ministering brother in his estimation more than to be told that his discourses were either almost or altogether unpremeditated. I rarely ever saw him more out of temper than he was with a young licentiate, who, burning with what he regarded as holy zeal, remarked that it seemed to him a waste of time to study and write sermons. The Doctor could not be called an active man, though he was always regular in visiting his people, and ministering to the sick and afflicted; and when he made an engagement eiher to preach or perform any other duty, it was never his own fault if it was not fulfilled.

“But for nothing was he more distinguished than an exemplary Christian life. I lived with his family and was in close proximity with him, for more than three years; and, during the whole of that time, was never able to detect a word, an action, or even a feeling, which I would dare to pronounce decidedly wrong. And yet, during that period, his church was rent with factions, many of his congregation inflamed with bitterness and wrath, and in the issue, about half of the number separated and constituted a new church. Against all these untoward influences, he struggled hard and prayed much; and the result was that he sustained himself throughout with the utmost Christian forbearance and good will. He was often called, in reference to his large share of gentleness and meekness, in connection with his smallness of stature,–“the little Moses.”

“Dr. Muir enjoyed, in a high degree, the good opinion and affectionate regards of his brethren in the ministry, and great weight was given to his counsels in the judicatories of the Church. The whole community in which he lived, reverenced him for the purity of his life, and the memory of his exalted virtues is still dear to many, though he has long since passed away.”

Words to Live By:
Rev. Muir clearly had learned to bridle his tongue. In this age of blogs and email, one constant problem is the ease with which we can address people and issues. Too often we speak without thinking, or hit Send before re-reading what we have written. If I may offer one guideline which would eliminate many of the problems we so often see in those settings–always speak or write from a context of true Christian humility, and in that context, strive to never say anything for which you might later have to apologize.

“A good name is rather to be chosen than great riches, and loving favor rather than silver and gold.” (Prov. 22:1, KJV)

“If any man among you seem to be religious and bridleth not his tongue, but deceiveth his own heart, this man’s religion is vain.” (James 1:26, KJV)

“Pure religion and undefiled before God and the Father is this, To visit the fatherless and widows in their affliction, and to keep himself unspotted from the world.” (James 1:27, KJV)