“Rise, George, and Defend the Blood-bought Church of Christ” 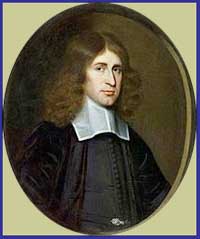 Some thought that he was the one who framed that Shorter Catechism answer about God’s character. Other doubted that he was the author of it.  We may never know for sure, but it was stated that whoever framed the answer to the question, “What is God?” was the youngest minister present on the Assembly committee tasked with the question’s answer. And Rev. George Gillespie was the youngest minister present in that committee of the historic Westminster Assembly. Maybe only eternity will reveal for sure the real author of Shorter Catechism Number 4.

The issue came to the forefront on an important discussion on the attributes of God. Asked to help formulate an answer, Rev. Gillespie (if indeed it was he who was the author) asked first for divine help. And so he led with a prayer for wisdom, saying in his prayer, “O God, thou art a Spirit, infinite, eternal and unchangeable, in Thy being, wisdom, power, holiness, justice, goodness, and truth.” The whole prayer was eventually written down by the court recorder with the magnificent answer to the character of God set in place for us to adore, memorize, pray, and teach our covenant children and others of God’s  family.

Our Presbyterian character today is George Gillespie. Born to a clergyman father in Kirkcaldy, Scotland on January 21, 1613, little is known of his early life in the manse.  We do know that he had a brother named Patrick.  We know that his mother was inclined to favor that child and not George. We know that the father would often come to the aid of George, telling prophetically that George would one day be a mighty servant of the Lord in Scotland. But beyond those tidbits, his growing up days are scarce of events.

That he was a Presbyterians was a given, as he was supported by the Presbytery of Kirkcaldy financially to attend at age 16 the University of St. Andrews. While there at this school, it was said that he gave ample evidence of genius and industry, with a rapid growth of mental power, and extensive learning. What remained solid in his classes were his convictions regarding the biblical basis of Presbyterianism, including its government. It was expected that if he wanted to be ordained into the ministry in those days, it would be the ordination approved by the Church of England. This he refused to do, so he became a domestic chaplain ministering to three families in Scotland.

A year before he was ordained, at a critical time in the life of Scotland when the English Liturgy was going to be forced on the kingdom of Scotland, George Gillespie wrote a book entitled A Dispute Against the English Popish Ceremonies Obtruded upon the Church of Scotland. It plainly dealt with the purity of worship. It was so overwhelming in its thoroughness that no bishop ever attempted to refute it.

Eventually, when the Presbyteries of the land were recognized as being able to ordain individuals, George Gillespie was ordained to the gospel ministry on this day, April 26, 1638, by the Presbytery of Kirkcaldy. He became the pastor of a congregation in Wemyss, Scotland, for four years. Then he was called to High Kirk in Edinburgh, Scotland. However, in the same year, he was appointed with four other ministers of the Church of Scotland—Alexander Henderson, Robert Douglas, Robert Baillie, and Samuel Rutherford, along with some elders—to go to London as non-voting members of the Westminster Assembly. Not all of them went, but George Gillespie did attend and was a major participant for four years in the Assembly. He would deliver some 167 speeches to the assembly on a variety of issues.

Once, when a famous older proponent argued for a point contrary to Presbyterianism, Samuel Rutherford urged George to “rise, George, and defend the church for which Christ has purchased with his own blood.” After the proponent of the opposite side had finished his delivery, during which time George Gillespie was constantly writing in his notebook, the latter stood and absolutely demolished his opponent’s arguments. When they opened the notebook later, expecting to find the notes for his speech, they could only find short statements, such as “Give light, O Lord.”

At the Assembly was closed, Rev. Gillespie returned to his charge in Edinburgh, Scotland. He was soon elected Moderator of the General Assembly in 1648, even though he was obviously weakened in his physical condition. He would go to be with the Lord on December 17, 1648, with what we call now tuberculosis.  Truly, he was one of the leading divines of his day.

Words to Live By:
To our Christian readers who may be among the younger servants of the Lord Jesus, as was George Gillespie, Paul’s Word to Timothy in 1 Timothy 4:12 is, “Let no one look down on your youthfulness, but rather in speech, conduct, love, faith, and purity, show yourself an example to those who believe.” (NAS)

For Further Study:
A Dispute Against the English Popish Ceremonies Obtruded upon the Church of Scotland has recently been reprinted in an improved edition. Click here for further details from the publisher.