May 4: What Constitutes Schism?

Can Two Walk Together, Except They Be Agreed? 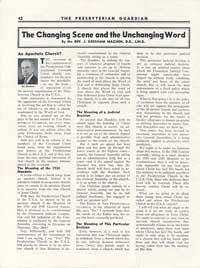 Words to Live By:  God alone is Lord of the conscience and has left it free from any doctrines or commandments of men, (a) which are in any respect contrary to the Word of God,or (b) which, in regard to matters of faith and worship are not governed by the Word of God