June 21: “What Fundamentalism Stands for Now”

It was on this day, June 21st, in 1925, that J. Gresham Machen’s famous essay, “What Fundamentalism Stands for Now” appeared on the pages of The New York Times. What follows is a condensed version of that essay, suited perhaps to your busy schedule today. The full essay can be found reprinted in J. GRESHAM MACHEN: SELECTED SHORTER WRITINGS. 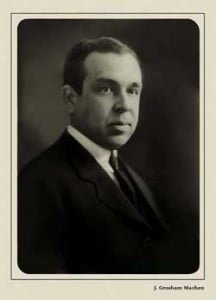 The term “fundamentalism” is distasteful to the present writer and to many persons who hold views similar to his. It seems to suggest some strange new sect; whereas in point of fact we are conscious simply of maintaining the historic Christian faith and of moving in the great central current of Christian life . . . Despite changes in the environment, there is something in Christianity which from the very beginning has remained the same . . .

The basis of the Christian view of God—by no means all of it, but the basis of it—is simply theism: the belief, namely, that the universe was created, and is now upheld by a personal Being upon whom it is dependent but who is not dependent upon it . . . The transcendence of God, what the Bible calls the holiness of God, is at the very root of the Christian religion. God is indeed, according to the Christian view, immanent in the world; but He is also personally distinct from the world . . .

According to historic Christianity, all mankind are under the just condemnation of God, and are utterly helpless because of the guilt and power of sin. According to another very widespread type of belief, human resources are sufficient for human needs, and self-development, especially the development of the religious nature, is the Christian ideal. This type of belief is optimistic about human nature . . . while historic Christianity regards all mankind as being hopelessly lost . . .

We deserved eternal death, but the Son of God, who was Himself God, came into this world for our redemption, took upon Himself the just punishment for our sins, died in our stead upon the cross, and finally completed His redeeming work by rising from the tomb in a glorious resurrection. There and there alone is found the Christian gospel; the piece of “good news” upon which all our hope is based . . .

Acceptance of this New Testament account of Jesus involves a certain attitude toward Him that is widely different from the attitude assumed by many persons of the Church today. Jesus . . . was not the first Christian, the initiator of a new type of religious life. He stood in a far more fundamental and far more intimate relationship to Christianity than that, because He was the One who made Christianity possible by His redeeming work. At no point does our attitude appear in more characteristic fashion than just here.

Words to Live By:
Most churches these days have a web site. Does your church’s web site have as one of its features a page where there is a clear presentation of the Gospel? Or to rephrase the question in a more personal way, if someone asked you, could you give a good, brief explanation of salvation by grace through faith in Jesus Christ alone? Machen’s words above can serve as an example, though I know you can find others as well. Look for a few, print them out and rehearse them, reading them out loud every few days until you come to a place where you are sure that you could give that account “in your sleep.”

“But sanctify the Lord God in your hearts: and be ready always to give an answer to every man that asketh you a reason of the hope that is in you with meekness and fear:”—1 Peter 3:15 (KJV)