It was on this day, July 22nd, in 1933 that Wiley Post became the first man to fly around the world, traversing 15,596 miles in 7 days, 18 hours, and 45 minutes.
Which has absolutely nothing to do with our post for today. Wiley was not a Presbyterian, to the best of my knowledge. It was just an interesting fact that I came across yesterday. Some will remember Wiley as the pilot who was flying Will Rogers across Alaska when their plane crashed and both men died, on August 15, 1935. Man knows not his time. So too for Richard Cameron, that noble Scottish minister, who died at Ayrsmoss on this day July 22, 1680.

The Lion of the Covenant
by Rev. David T. Myers 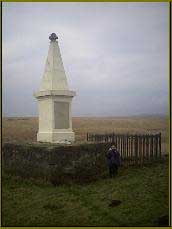