The Lone Star of the Covenant
by Rev. David T. Myers 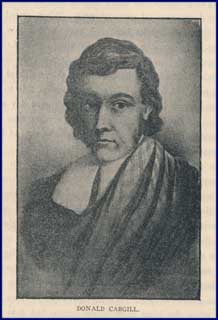 Challenged by his land owner father to become a minister, Donald Cargill resisted the suggestion at the first. His inclination was not the gospel ministry. Finally, with what his father had put into his hand and heart, young Cargill at last set aside a day to prayerfully consider whether God was calling him to this ministry. It was said that a text from Ezekiel came into his mind, “Son of man, eat this roll, and go speak to the house of Israel.” Then when Presbytery chose the same text from Ezekiel during his trials, there was no doubt of his divine calling to the ministry.

His first charge was that of the Barony Church in Glasgow, Scotland, which charge would take his time and talents from 1655 until 1662. The church was divided in Covenanting groups and non-Covenanting groups of people. No one can abide long in such a divided congregation without receiving the wrath of one group or the praise of another. All this changed however in 1661, upon the restoration of Charles, when Donald Cargill delivered a sermon before a great crowd. He said in part, “the king will be the woefullest sight that ever the poor Church of Scotland saw. Woe! Woe! Woe! unto him, his name shall stink while the world’s stands, for treachery, tyranny and lechery.” Obviously, this was not a statement which would bring good relations between the Crown and his place as pastor in Scotland! And indeed, before a week went by, government soldiers were out looking for him, and he had gone into hiding.

His ministry from that point on until his capture by the Crown was that of witnessing before small groups of men and women. From 1668 on, he became a traveling evangelist for the Gospel, escaping death and destruction by many a close call. To be sure, he showed bravery and courage in many a situation. In other cases, he was weakened and oppressed by lack of assurance.

On one occasion, a great crowd was present to hear the word of grace from his lips. But in addition to that Word came words which amounted to a curse upon his persecutors. He said, “I, being a minister of Jesus Christ, and having authority and power from Him, do, in His name, and by His Spirit excommunicate, cast out of the true Church, and deliver to Satan, Charles the Second . . . The Duke of York, the Duke of Monmouth, the Duke of Lauderdale, the Duke of Rothes, General Dalziel, and Sir George MacKenzie. And as the causes are just so being done by a minister of the gospel, and in such a way as the present persecutions would admit of, the sentence is just. And there are no kings or ministers on earth who, without repentance of these persons can reverse these sentences. God, who is their author, is more engaged to the ratifying of them: and all that acknowledge the Scriptures ought to acknowledge them.” There is no doubt that such words were inflammatory and some even questioned and criticized such talk. Yet all those he mentioned here in his curse did die in strange ways. As Calvinists, we see no place for coincidence in the realm of persons, places, and events on this earth.

Finally caught by the authorities, he would be martyred on July 27, 1681. His last words were “farewell, all relations and friends in Christ; farewell, acquaintances and earthly enjoyments; farewell, reading and preaching, praying and believing, wanderings, reproach, and sufferings. Welcome, Father, Son, and Holy Spirit; into Thy hands I commend my spirit.”

Words to Live By:
Standing in the crowd of mourners was James Renwick, a future minister of the Covenanters and the last in Scotland to die by hanging for the cause of Christ. God is so gracious as to continue His witness in the land. Consider times when mere man thought that some event was the end of the matter. But God . . . But God . . . But God! To Him goes our prayers and praise for the truth that “He does according to His will in the hosts of heaven And among the inhabitants of earth; and no one can ward off His hand Or say to Him, ‘What have You done?’” (Daniel 4:35b)