On August 3, 1936, newspapers in and around Wilmington, Delaware ran the following article covering the closure of the Head-of-Christiana Presbyterian Church, where the Rev. Henry G. Welbon was pastor at the time.

Rev. H.G. Welbon Uses Own Key at Head-of-Christiana.
Has Services in Spite of Ban. 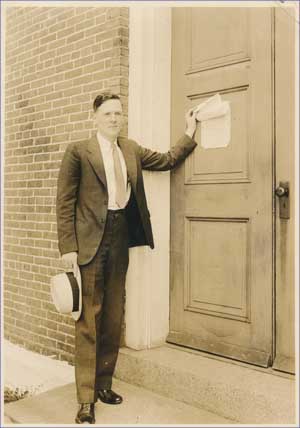 The Rev. Henry G. Welbon, fundamentalist pastor recently unfrocked by the Presbytery of New Castle for his refusal to bow to that body in the fundamentalist-modernist conflict, found himself locked out of Head-of-Christiana church when he went there yesterday to conduct Sunday services.

After consulting an attorney, he opened his church with his own key and conducted services as usual, ignoring a notice that had been tacked on the door by four trustees forbidding the use of the building except with their permission.

The notice was also signed by a committee of four established by the Presbytery to act as the church Session. The four trustees are a majority of the board who side with the Presbytery.

The trustees acted to exercise their authority over the church property, now in dispute between Presbytery and the seceding group led at Head-of-Christiana by Mr. Welbon.

“It is now up to this (seceding) group to prove their right of possession of the church and their right to enter it,” one of the four trustees said today.

The notice text was: “To whom it may concern: We the undersigned members of the Board of Trustees of Head-of-Christiana Church and the committee appointed by the Presbytery of New Castle to exercise the function of the session do hereby declare this church building to be closed and to be opened and used only by special permission until such time as this notice is withdrawn.”

Mr. Welbon said he acted upon advice of his attorney in opening the church. His attorney, Mr. Welbon said, stated that so long as Mr. Welbon had the key he could not be locked out. The four trustees obtained a key which they believed to be the only one to the church, from the sexton’s home.

Dating back to legal cases set down in the 19th-century, local church property in the PCUSA legally belonged to the PCUSA Presbyteryies Thus, when conservative Presbyterians left the PCUSA in the 1930’s, in almost every case they lost their church buildings.
The loss of those buildings was a substantial setback, particularly in the midst of an economic depression. So this was one major reason for the slow initial growth of both the Orthodox Presbyterian Church and the Bible Presbyterian Church, as leaving congregations had to start over and finance new buildings. That in turn may have been one very pragmatic reason why more conservatives did not leave the denomination.
By contrast, when the Presbyterian Church in America was formed in 1973, certain legal precedents had been established in the 1960s  which allowed most of the leaving congregations to retain their property. So these PCA congregations were on a better  footing to begin with, plus it can be argued that the economic times were better. There were substantial costs of leaving in both the ’30’s and the ’70’s, though the costs were somewhat different in each instance.

Words to Live By:
The church is not a building. Not a physical building, anyway. The  visible church consists of all those people and their children that have entered into a covenant with the one true God by way of His Son and the sacrifice that He paid on behalf of a chosen people.

“So then you are no longer dstrangers and aliens, but you are fellow citizens with the saints and members of the household of God, built on the foundation of the apostles and prophets, Christ Jesus himself being the cornerstone, in whom the whole structure, being joined together, grows into a holy temple in the Lord. In him you also are being built together into a dwelling place for God by the Spirit. (Ephesians 2:19-22, ESV)

The Notice pinned to the church’s front door: 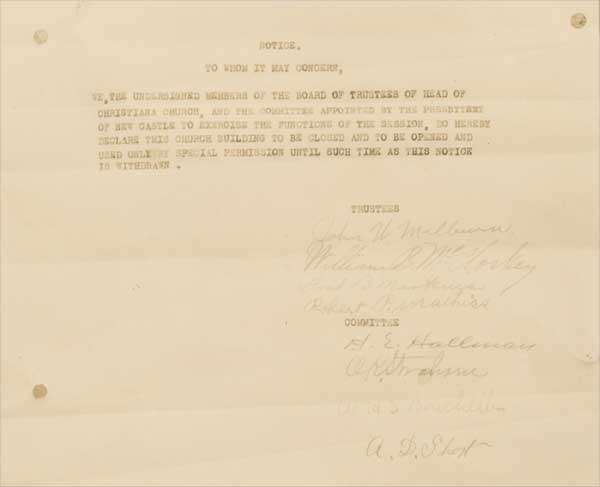