Let Everything Be Done Decently and In Order.

At last, with the PCUS about to merge with the UPCUSA, it was clear that the time had come to leave. Committees were formed and plans were laid for the establishment of the new denomination. A “Convocation of Sessions” gathered in May of 1973, and this convention in turn authorized the meeting of an “Advisory Convention,” whose purpose was to finalize plans for the meeting of the first General Assembly.

The following letter, under the signature of founding father W. Jack Williamson, explains the process and the thinking behind these plans.

We salute you in the precious Name of Jesus Christ and invite you to attend the Advisory Convention for the Continuing Presbyterian Church, Asheville, N. C., August 7-9, 1973.

The Advisory Convention was called by a Convocation of Sessions, assembled in Atlanta, on May 19, 1973. The brethren there officially represented over 260 local congregations and more than 70,000 Southern Presbyterians. In an adopted statement, entitled “The Reaffirmations of 1973,” the Convocation committed itself to the rebirth and continuation of a Presbyterian Church, true to the Scriptures, to the Reformed Faith, and obedient to the Great Commission of Jesus Christ.

The Advisory Convention is expected to call for a General Assembly which will formally organize a reborn Presbyterian Church.

It now is clear that a large number of Christians in our Southland sincerely believe that God has called them to form such a continuing church in 1973. They believe that there is an irreconcilable separation between those who hold different idealogies within the Presbyterian Church in the United States. They are convinced that unless two be agreed they cannot walk together. Because God has led them to move, they do so with determination and resolve, but with many tears and profound sorrow for the necessity that is laid upon them.

We honor and respect those who, in good conscience differ with us. We pledge our love as brothers in Christ to all those who know Jesus Christ as Saviour and Lord, but who in this present situation follow a different course of action. We thus commit ourselves to continued fellowship with all men of good will and like conviction of the truth — all for the Glory of God and the unity of the Kingdom of our Lord Jesus Christ.

We enclose an information sheet concerning credentials and registration procedures for the Advisory Convention. If you desire to walk with us into the reborn Church, we invite you to be present.

Please join with us in fervent prayer for the universal Church which consists of all those throughout the world that profess the true religion and is the Kingdom of the Lord Jesus Christ and the house and family of God.

Yours in His service,

The Organizing Committee for a Continuing Church 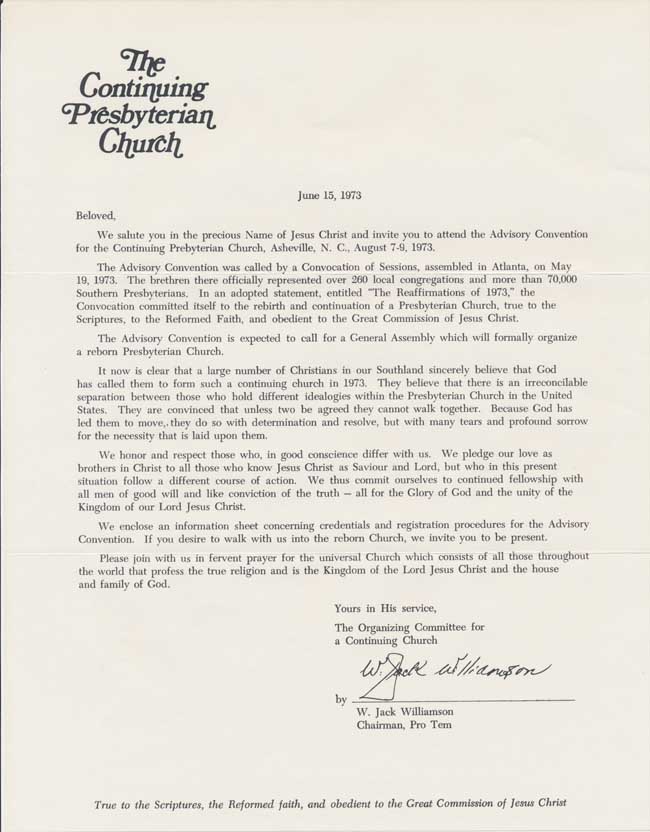